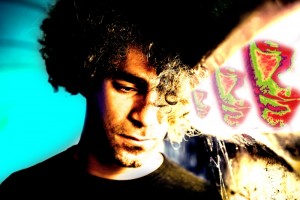 Zaflon likes to challenge and explore through his music, guiding us through the claustrophobic and dusk-shrouded forests of his creations.

While undoubtedly trip-hop, LDP 1 explores darker territory; visiting a more subterranean, downtempo world than much of the surrounding genre. Evocative of the likes of Burial, Actress and Zomby in its ability to swim through the murkier waters of introspection and cloying isolation, it is deep and progressive in shape, there is no element of easy listening here.

Using the vocal talents of Gilan_Music he explores themes such as dark self-absorption, paranoia, the starkness of reality and mortality. Among the often suffocating cloak of dread and penetrating disquiet there are brief moments of poetic optimism, a sign of light filtering through the fog.

“Despite All Odds” opens and immediately shuts the creaking trapdoor as we descend the steps. Samples from nature are tangled with cracked guitars and slow-warping synthesizers. We have entered the nocturnal world with Zaflon as our guide.

“Nightmare Division” takes us further in with Gilan providing both the male and female vocals adding to the disorientation and unsettling atmosphere. The contrasts are remarkable, a schizophrenic vibe of uncertainty and split identity. There are numerous samples of river sounds, as Zaflon explains ‘….noises that I recorded on the Thames riverbank, including the hull of a big old barge being hit with a stick. There are flies, doors and breaking watermelons in there, too, among plenty of other things.’

“Dear Friend of Mine” is intensely personal, he says ‘…a tribute to a school friend of mine who died earlier this year. He’s the first guy I was in a band with but he went on to have a troubled life. This song is a tribute to the good times we had while at secondary school learning to play music together. This is the only track on LDP 1 where I used metallic samples in the beat to bring forward the harshness of reality.’

Closing out, “7 Stalkers” again featuring Gilan on vocals, pulls the whole together. Mellow, warm and spacey, it is Royksopp in a darker moment or Massive Attack kicking back and soothing our brows with whispered assurances and vague threats. There is an underlying menace throughout.

This is a rewarding EP that offers up a little more of itself with each play. Exploring these haunted backwaters takes courage and Zaflon proves to be the most adept of tour guides.