Internationally renowned Japanese metal band X Japan will take the stage at Madison Square Garden on October 11  (this Saturday), in a highly anticipated show sponsored by New York Comic Con.  One of the most influential rock bands in Japanese history, X Japan has sold more than 30 million records and have sold out the 55,000-seat Tokyo Dome a record 18 times.  Weaving speed metal’s pounding drums and shredding guitars with elements of pop and classical music, X Japan created a unique sound they then coupled with frenetic live performances; the combination earned the band a large, loyal fan base world wide. 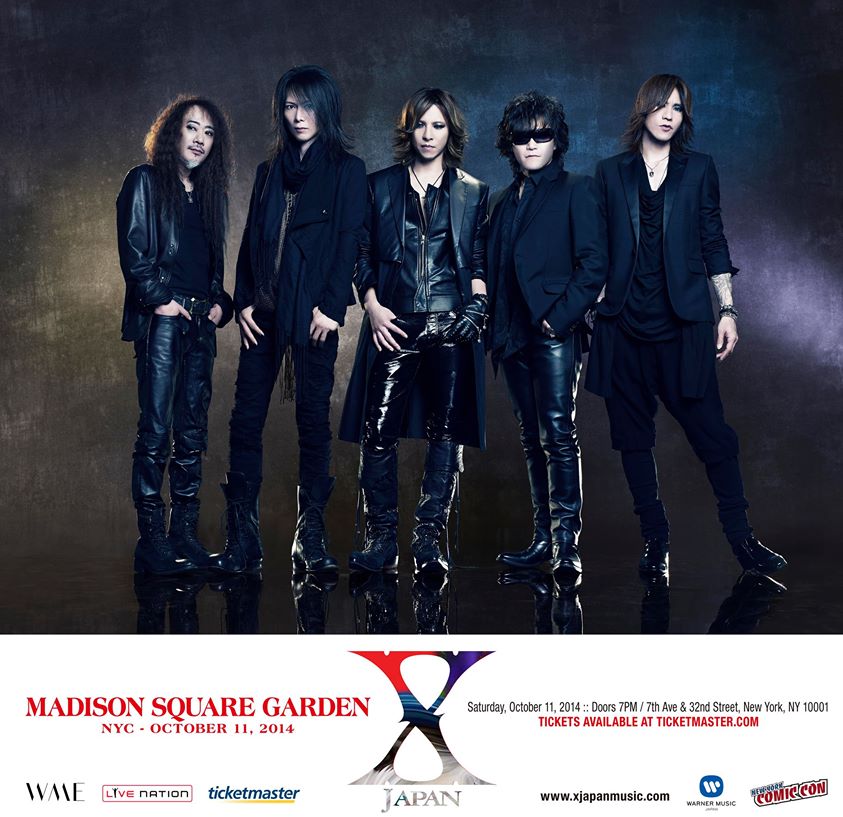 The magic this band creates on stage was perfectly captured in this “leave-it-all-on-the-stage” performance recorded at the Tokyo Dome.  The emotion of the band members while performing “Endless Rain” and the continued singing of the audience – even after the band left the stage – gave me goose bumps.  Having never seen X Japan perform, I was bemused to find myself choked by feelings and wiping my eyes at the end of this video. It has been said that you know music is good when it either  moves your feet or moves your heart. Watching this video makes clear that the music of X Japan is incredibly good, by any definition. It also makes obvious why X Japan has a place in music history and why they are beloved by legions of fans around the world.

However, X Japan’s influence is not limited solely to their sound. The band also holds a place in Japanese cultural and social history. In the band’s early years they favored flamboyant outfits, elaborate hairstyles, and androgynous make-up and the band’s popularity helped propel the cultural and musical movement known in Japan as “Visual-Kei.”  With their aesthetic embracing both futuristic as well as Japanese historical imagery, X Japan’s style had immense influence on today’s anime and cosplay cultures.

In line with their broad sphere of influence, X Japan will also appear at New York Comic Con and participate on a panel with Marvel Comics founder Stan Lee to discuss Blood Red Dragon, the Marvel comic based on X Japan drummer and founding member, Yoshiki.

If you live in the area or will be in NYC for New York Comic Con, go now and get your tickets. X Japan at MSG is a show that promises to be chock-full of awesomeness and one that you do not want to miss.