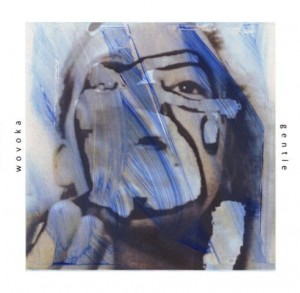 So how is the Christmas shopping going? Still frantically running around every Christmas market you can find sampling all the mulled wine on offer? Still playing it cool on the off chance Santa will accidently leave his sack behind so you can give everyone the exact present they want? Whatever your strategy, it is about time you treated yourself to a little something.

May I tempt sir/madam with a delightful EP by Wovoka Gentle? Oh go on! It is only a wafer thin EP!?!

The ‘Blue’ EP is the second EP to be released this year by London based trio Wovoka Gentle. Don’t be fooled into thinking that the title of the EP predicts the content. The EP itself has no moniker and the colour reference merely refers to the cover design, to distinguish it from the previous ‘Yellow’ EP.

The band consist of twin sisters Imogen and Ellie Mason, with William Stokes. The band coalesced in 2014, writing and performing the score for avant-garde theatre company Stasis, in its production of ‘A Table’. This directly led them onto providing music for Alex Howarth’s stage adaptation of ‘What’s Eating Gilbert Grape’. Since these stage productions they have released two EP’s, ‘Yellow’ in the summer of 2015 and now available as you read this ‘Blue’.

It is the ‘stage’ upbringing of the band that informs not only the music but their live performance too. I confess I have never seen them live, but fully intend to after hearing this. Performance art installations and projected visuals are all emersed into the live experience. However, you can also hear this ‘stage’ influence in the sound. A psychedelic/folk soundscape that sounds big enough to fill an entire theatre. There is a rich mixture of instruments and voices, all with an air of experimentation that never veers to far away from the tune at its heart.

The ‘Blue’ EP itself has five tracks to offer. So let’s take a closer look.

‘Likeness’ opens with the sound of harps, not the usual go to instrument for most bands. This is then mixed with the drums and a guitar refrain reminiscent of War On Drugs. All this just for the introduction! The chorus has a heavy electronic vibe with the vocals tracked to give a choral feel. This song is like having five songs all sandblasted together but done in a remarkable way. At eight and a half minutes it holds your attention all the way through and still makes you think you’ve just heard a three minute pop song.

‘Peace Is Its Own Reward’ is my favourite on offer. This has an early New Pornographers feel. A quirky offbeat tune, with a driving rhythm and lovely interplay between the male and female vocals. It even finishes with a keyboard sound not dissimilar to an appearance by the mothership in 80’s arcade game Space Invaders. What’s not to like!

‘Radio Track (Unaired)’ is probably so called as it is only one of two tracks on offer here that make it under the three minute mark. A lush, harmonic sixties feel chorus breaks up the distorted vocal of the verse, all over a bed of talking and laughing in the background. Intrigued? You should be.
‘Light Within Light’ is a soundscape instrumental. The talking background continues underlaying the echos of distorted guitars. The most experimental work on offer.

‘You Have Saved Our Lives, We Are Eternally Grateful’ has shades of Tame Impala in its make-up, with a Cocteau Twins feel for the chorus. A joyous end to the EP with some glorious noises and keyboard sounds on offer.

There is an awful lot on offer here to get your teeth into, or rather your ears. A myriad of different instrumentation and vocal effects, all expertly wielded into tunes you can happily hum along to. A really good EP that I would thoroughly recommend to anyone. I for one will be searching out the ‘Yellow’ EP on the strength of this alone and you can’t give much higher praise than that. Have a listen here and if you like what you hear, have no hesistation in spending your hard earned cash!