You might not expect a podcast about Iron Maiden to be listed in Apple Music’s Comedy section but Wayne’s Iron Maiden Podcast (WIMP) is not your typical podcast.

With Iron Maiden trending lately through Twitter listening parties, online teasers and rumors of their first release since 2015, it may seem to be the perfect time to host a podcast about the metal legends. Strangely, character-based comedy WIMP is about to go on hiatus, drawing a line under the 1980s period with a end-of-cycle episode on 13 July.

“It’s the perfect time to have a break,” says writer and narrator Paul D. “Carrying on doing shows about the 1990s period when there will be a new buzz about the band wouldn’t be the best idea. There probably should have been breaks between each album anyway as doing weekly episodes has meant it is often a last minute process.” 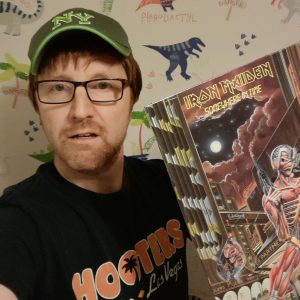 The podcast is hosted by ‘Wayne’, a man who lives at home with his mom and who shares real and surreal insights into his and the band’s past. It’s a formula that draws listeners in whether they are fans of Iron Maiden or not. Discovering the band as a boy growing up in Birmingham, UK in the 1980s we learn of the impact they had on his childhood and teen years which he reflects on now as an adult, his awkwardness adding to the absurdity.

“There are many subtle references in the band’s history that have led to some of the subplots in the podcast,” Paul tells us. “Wayne’s quality in his analysis of the songs is mixed and even though you have to know your stuff when you consider the obsessive nature of many Iron Maiden fans, they seem to accept the eccentricity of his thoughts which can often provide some insightful and innovative commentary.”

There have been many highlights: dance choreography; new lyrics; previous unreleased footage from the band; and a strange obsession over biscuits and tinned pies. The show isn’t always about Wayne though. One of the highlights of each episode are his phone calls to friend and neighbor Trevor who gives a brief opinion before providing a poem inspired by the episode’s featured song.

“I think Trevor has a been a surprising highlight for many listeners,” says Paul. “He has grown into the role after I originally questioned the inclusion of this weird man with seemingly rubbish poetry.”

So, how long will it be before the podcast delves in to the next decade of Iron Maiden songs?

“I am amazed the show has lasted this long,” says Paul. “The first episode was a jokey one-off, then when it gained interest I thought I’d do another one. Then I thought I’d just do the one album and now here we are seven albums in.  I did think the 80s would be a good place to end it and there’s still a part of me that thinks it might be best to stop here but I do have storylines and ideas in reserve in case I do continue. I have enjoyed it so much, the writing, the characters, the reaction. As for when it comes back, I will wait and see. It could be a few months, or maybe in the new year.”

Listen to Wayne’s Iron Maiden Podcast on Apple Podcasts, Spotify or wherever you get your podcasts.

Written By
Alex Rago
More from Alex Rago
LA alt-pop trio Tyrone’s Jacket may be new to some, but they...
Read More