Among the multitude of tributes, benefits, honorings and remembrance events that took place this past Thursday just in New York City was a very small gathering of a hundred or so in a tiny stone garden tucked between two high-rise apartment buildings right off Times Square.  This tribute and benefit was hosted by Stonehenge NYC, owners/management of one of the apartment buildings, The Ritz Plaza.  Together with Arthouse Live they brought William Close and The Earth Harp Collective to create a very special evening. 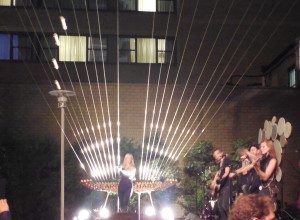 The miniature piazza is a sacred space that honors the memories of the fifteen members of Engine 54 Ladder 4 Battalion 9, the station that serves the neighborhood that includes the Ritz Plaza.  The company had the highest number of lives lost by one house on September 11.  This quiet spot is gated from the hustle and bustle of W 48th Street and has a fountain whose center stone bears the names of the fallen.  On this night there were roses left on the stone by the families of Engine 54 Ladder 4 Battalion 9 who had been gifted with a private concert by William and The Collective earlier in the day.  Fire buckets with additional roses were stationed around the fountain for those attending the evening event to add with their prayers to the monument/fountain.

Thanks to all the stone, concrete and brick along with the shape of the space, the acoustics were perfect for the evening’s musical performances.  The Earth Harp’s resonator was positioned on the stage that was opposite from the Ritz Plaza and the strings stretched to the top of a two story section at the back of the building.  This allowed for the sound of the Harp to fill the space but then The Collective added percussion, guitar, violin and vocals to that.  Richard Sherwood brought the thunder of a traditional drum kit and another of William’s original instruments, the drum cloud.  Hannah Thiem’s bow drew sweet sounds from her violin.  Thomas Hjorth stirred a bright acoustic guitar into the mixture and the unbelievable, glorious vocals of Rafe Pearlman showed the audience what the voices of angels really sound like.  From the opening chords of “Amazing Grace”, which set the spiritual tone for the rest of the evening, there were chills and tears and love shared though the beauty of the music. 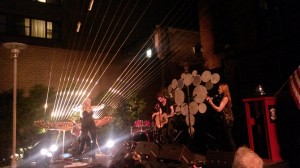 U2 and Skingraft Designs have both been in pop culture buzz this week and there were nods to them in the setlist.  The Earth Harp Collective performed their great mash-up of Pachelbel’s Canon with “With Or Without You” and William shared one of his recent instrumental creations, the percussion jacket, which was designed in collaboration with Jonny Cota of Skingraft.  Songs also included modern classics “The Blood Of Eden” from Peter Gabriel’s catalog and Leonard Cohen’s iconic “Hallelujah”.  There was romance in the air with Moonlight Sonata and then a number of Earth Harp Collective original songs such as “Great Superior”.  The final actual song was “Love Reign O’er Me” which is a very strong emotional piece which had spirits ramped to a high energy level.  After the applause subsided William took to the Harp solo, explaining that he was going to bring that level back down sonically.  Playing gentle harmonic melodies the space was returned to calm revery.

Two other elements that added to the whole experience for this writer were visual.  Before the performance started, I looked to the south.  Between the buildings, one could see one of the two high-intensity beacons that marked the former positions of the twin towers.  While the concert was in progress, I looked up and watched the puffy cumulus clouds that were moving from south to north and eerily resembled the smoke from that day thirteen years ago.   On the way home and even now my thought is that if church were like this all the time, I would always be there.  Not only for this heavenly music but for the community that existed for those few hours in that space.  Every ethnicity, many religions and spiritualities, economic statuses, age groups, states of physical wellness all together as family.  It is how the global community should be.