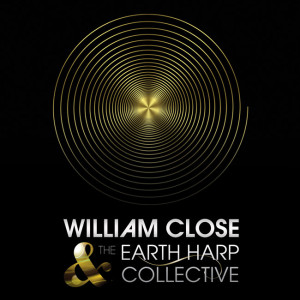 On July 13th, William Close posted his latest album Behind the Veil on Bandcamp where it can still be streamed and/or purchased for $15.  However, on September 3rd, these tracks will get wider exposure when it is added to major on-line digital music retailers including iTunes and Amazon.

Having been listening to the album for over a month now, I continue to find different things I love about it.  Also, experiencing the Earth Harp live helped to provide the context to compare these recordings to.  As was pointed out in the feature about William in Issue 5 of FourCulture, after losing his house to a fire, William choose to look for the positive energy in that and built the new home so that the included studio could accommodate stringing the harp outside through an opening in the studio wall.  Based on my “Harp experience” in June, I feel that the recordings done in the new studio are very close to live performances.

Behind the Veil includes original music along with Close’s takes on some standard classical pieces such as the Beethoven’s “Moonlight Sonata and Pachelbal’s “Canon in D”, the latter being combined with U2’s “With or Without You” which works perfectly. The Who’s “Love Reign O’er Me” gets a truly wonderful Close-treatment, showing more of how The Earth Harp can play in the rock world too.  The opening of the title track, an original work, makes me feel like Sirius Black in Harry Potter as he falls through the “gate” in the battle with the Death Eaters.  From there it is that “life passing before your eyes” part of the ending of a life-cycle on this plain.  You kind of float through and reflect.  “Great Superior” paints melodic vocals on top of the Harp and other traditional instruments creating one of the “mini-symphonies” as William calls them on this album.  The only other track I will call out in this review is “Mothership” which has been on previous EPs.  Another version of this piece titled “Into the Mothership” is on The Earth Harp Sessions Vol. 1 and is a go-to meditation piece for me due to all the mechanical sounds in that version.  “Mothership” is a melodic version (the actual music of the other).  I have to say I do prefer “Into…” as it is longer by two full minutes and has progression to it.  All in this entire album is incredibly successful.  One should listen to it on either a very good stereo system or with really good headphones to get all the richness, not only of The Earth Harp, but all the instrumentals and vocals.

Other musicians included on the album are Thomas Hjorth, Rafe Pearlman, Laura Vail, Onyay Pheori, Jesper Kristensen, Gordon Bash and Rich Sherwood.  Also playing the Harp either with William or solo on some tracks is Sarah Werrin who recently added Mrs. William Close to her resume.  Sarah is also the creator of the album art and shares the Executive Producer status with William.

William Close on the web: