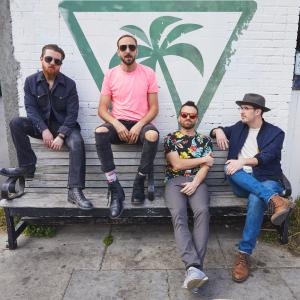 The boys of West Coast Weekend have one simple goal – bring the good vibes. And they’ve succeeded in doing that with their debut EP We Don’t Care, produced by the Grammy-nominated Josh “Igloo” Monroy. The EP’s lead single “Heart Attack” has already garnered heavy radio play at LA’s World Famous KROQ, and the band also opened for Sleeplust during their June residency at The Satellite (also in LA).

“This EP is a taste of what’s to come,” the band explains. “It’s our launching point, an introduction to us and the sound we’ve created. The way the first two singles have been received and the way people dance to them is inspiring our writing and creating. We hope everyone enjoys the full EP as much as we enjoyed making it!”

Keep an eye out for more sunshine drenched infectious tunes from West Coast Weekend later in 2019. For now, enjoy their delightful new EP below.

Written By
Alex Rago
More from Alex Rago
Seattle’s Spirit Award are gearing up for the release of their new...
Read More