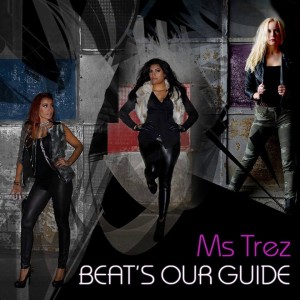 Ladies and gents, in the past couple of weeks I’ve been checking the billboard top 200 album releases.  There has been a presence missing from music lately; women. I looked and there was only one woman in the top twenty. This is a serious issue that can soon be stopped thanks to the fresh dance tracks of Ms.Trez’s first EP release Beat’s Our Guide, which dropped on July 3.

The Swedish girl group Ms. Trez is composed of Ms. Lorena Lindblad, Ms. Marlene Pärni, and Ms. Mira Myllyniemi. This EP is one of the freshest dance club beats that the globe has been missing for quite a long time. It is a rare treat when I can say that the vocals aren’t distorted in any way. There would be no reason to cover the lead vocals which come out like velvet. Through every song you’re seeing the perfect example of harmonies that complement the lead with sweetness and ferocity brought on by Ms. Marlene and Ms. Mira. Ms. Trez is like a boiling cauldron of some of the greatest girl groups of all time; the harmonies of En Vogue or Destiny’s Child, the dance vibes of the Pussycat Dolls, and the pure ferociousness of the Spice Girls. Welcome to a new world of Girl Power.

When you look at women of pop music lately, there hasn’t really been anything fresh.  Popping in the track “Sweet Liar” by the ladies of Ms. Trez has really changed that thought in myself immediately. The song, a very lush ballad, dropped as a single last year. I’m brought back to an element of the late 90’s which made girl groups special.  I hate to use the term the perfect breakup song; yet there would be no other way to describe it. “How could you fail to see the pain you caused to me?”–very immersive lyrics, and the heavy emotions pulsate through your veins.

If heartache isn’t your thing, that’s perfect; these ladies dominate the dance floor. I can’t name a single track to point out that won’t have you moving.  Even at the end of the EP the ladies have included a couple of remixes just for that extra punch.  The touch of their native tongue on the remix of Louder (Vill Ha Dig Nu) which literally translates into “Want You Now” really brings a special element that reminds you that these ladies are Swedish and they’re proud of it. They’ve got a lot of talent that has emerged out of their nation for many years and it may be tough shoes to fill.

We here have no doubt that this will be an EP smash. It will only be a matter of time until their worldwide explosion.  Then you’ll see what these independent women are really made of.

Beat’s Our Guide is available on iTunes.