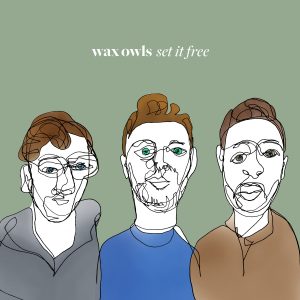 LA indie/alt trio Wax Owls – a group that features an accomplished cast of musicians – have released their debut single “Set It Free.” The track is a slice of songwriting heaven, checking all the boxes and headlined by vocalist Gerry Hirschfeld’s soaring rhasp. “Set it Free” will certainly hit the sweet spot of alt powerhouses like Lumineers, Of Monsters & Men, and Young the Giant. This fall, the song will be prominently featured in the film What She Said, inspired by the #MeToo movement.

“I wrote the first draft of this song while in the process of moving from Chicago back to Los Angeles, my hometown,” says Gerry Hirschfeld. “I was feeling nostalgic for the time I spent there, but was very ready to move back to the west coast since my depression hit a peak (or low point depending on how you look at it) while in Chicago. Once back in LA, a filmmaker friend, Jenny Lester, reached out saying that she needed a song for a key scene in her movie where the main character makes a difficult decision to move back to New York and to testify in court against her abuser. Jenny agreed that the nostalgic yet hopeful feel of ‘Set It Free’ fit the scene nicely, so I quickly recorded the song the very next weekend.”

Keep an eye out for more new music from Wax Owls this fall. For now, check out “Set it Free” below.