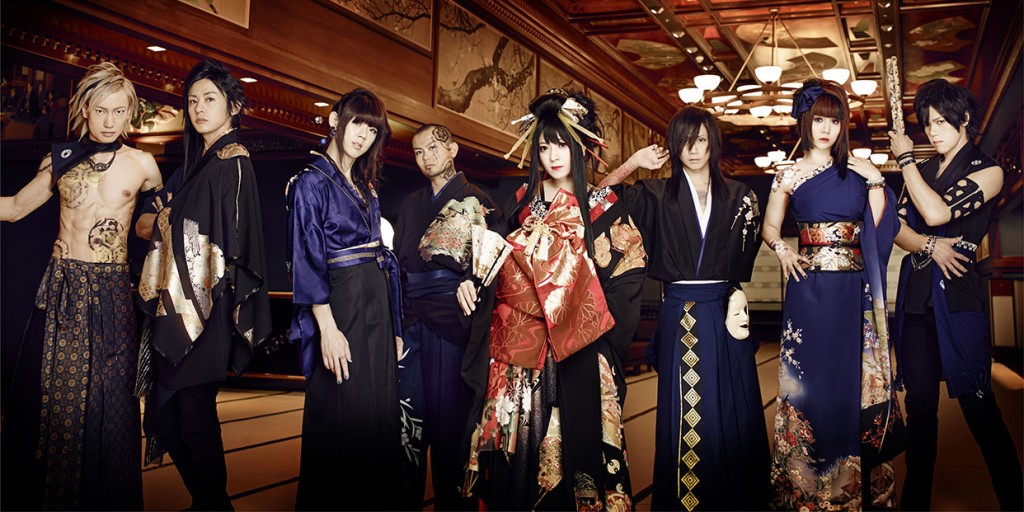 WagakkiBand, Japan’s latest and hottest sonic export, are playing two highly anticipated US shows this month, in NYC and at SXSW 2016.

The band is Yuko Suzuhana (lead vocals), Wasabi (drums), Asa (bass), Machiya (guitar, backing vocals), Daisuke (shakuhachi), Kiyoshi (koto), Beni (shamisen), and Kurona (taiko). The band released their debut album in 2014 and Vocalo Zanmai twice made the Top 10 during its 22-week stay in Japan’s Top 100. When their sophomore album, Yasouemaki, was released in September 2015, it went all the way to #1 on the Japanese charts. In addition, WagakkiBand was named an “Artist To Watch” by MTV Japan.  Their single “Hangeki no Yaiba” is the theme song for the live-action drama “Attack on Titan” made for dTV in Japan. Their single “Ikusa/Nadeshiko Sakura” is the theme song for the anime TV adaptation of Koei’s Samurai Warriors video game series. And the video for their hit single, “Senbonzakura,” has more than 36 million views on YouTube.

The band played their first US show on July 4, 2015, at the sold-out Club Nokia in Los Angeles during Anime Expo. When they return to the US this month, WagakkiBand will play a show in New York City at Irving Plaza on March 14, 2016. The band will also play in Austin at SXSW 2016 on March 18, 2016, at the The Des Moines Embassy (Red River & 6th street). The SXSW show is free and open to the public.  Further information can be found at the band’s links below.