In our early childhood, we all learned that there are four stages for a caterpillar to become a butterfly: egg, caterpillar, pupa, and lastly they grow their wings and turn into a magnificent butterfly.  In music, there’s no set rule on how a band grows.  Sometimes there are bands that go from their very infancy to something great in a matter of years.  This time, we have a band that has accomplished it in a matter of months.  UK’s own Vodsel only formed in late 2012, but Chris Williams and Paul Davies are quickly gaining the attention of the interwebs with their dark electric sound that is quite reminiscent of Depeche Mode and Joy Division.  We had the chance to talk to the guys to learn how they’ve accomplished so much in such little time and what the future holds for them as they evolve from friends to band. 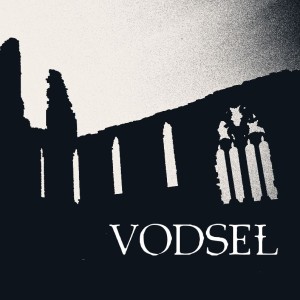 Apparently you guys have only been together as a duo for less than a year.  How did you guys meet?  What made you decide that you two wanted to make music together?  What kind of musical experience did you have prior to forming?

PAUL:  We were originally in a band together about 8 years ago that didn’t quite take off despite regular gigs in Liverpool and Manchester and decent studio time.  Since then, we’ve both been involved in a variety of other solo and group projects.

CHRIS:  I’ve been in various bands for a number of years now, mainly working in punky/industrial genres.  I’d been recording my own stuff under the Vodsel name for a year or so before I hooked up with Paul again.

PAUL:  Yeah, I had heard the odd Vodsel tracks some of which had an 80s sound which I liked, but near the end of last year I noticed that Chris had put several up there in a short space of time and unlike some of his earlier stuff it had him doing vocals.  There were two new ones (“Dark Measures” and “Black Dog”) that I particularly liked (both ended up on the first E.P).  I’d been working with other people creating songs by simply file sharing and adding parts to them so I offered to provide vocals on any new songs he might have in the same way.  I thought he might agree and we’d end up doing two or three at most.  I didn’t expect to be granted access to his entire back catalogue.

You have been making music together for a short of time, but you guys have already gained quite a bit of a following.  How do you feel about the attention you’re gaining so far?  What do you think the future will hold for Vodsel?

CHRIS:  We have done well in attracting people through social media and with the help of online radio and blogs we have been able to get quite a bit of interest.  The modern thirst for likes and followers is only useful of course if people are engaging with your posts and hopefully downloading your music.  I think we have a good range of followers and from all around the world.

CHRIS:  I think it also helps that our songs so far range from synth pop to dark wave so we appeal to a wide range of people.

PAUL:  We’re ever changing as well.  The early releases were really just me singing on Chris’s songs.  The album saw 50/50 lyric duties and now there has been an entire shift where I do the lyrics.  On newer releases, I am getting more involved in the mix and adding percussion or synths as well as vocals.  Before I was just doing the mastering so there may be a development in our sound in that respect.

So, it’s only the middle of 2013, you have already dropped an album and you’re prepping to drop more this year.  What can you tell us about this upcoming album? With so much material out this year alone, how many tracks have you actually recorded within the span of releases?

PAUL:  We are quite well ahead of ourselves in terms of future plans, but these can change at the drop of a hat.  Back in early May we had a new 12-song album in quite an advanced stage, but it was probably too soon after the debut album (released in March on CD/April for digital download) for us to release it straightaway.

CHRIS:  In hindsight that was a good move as three or four of the songs will perhaps never be released.  Some of the songs from what was the second album have been released to buy on Bandcamp in the meantime.  Currently we’re thinking we will probably release these with some of the Soundcloud only releases to make a compilation along with some other new songs. Also in the background we are working on other new songs to plan for a release after this compilation so we won’t be standing still for a while.

PAUL:  Chris produces songs at a staggering rate.  Since we finished the debut album songs in February, he has sent about 40 instrumentals for me to look at!

Of course, we could probably expect live shows out of Vodsel in the future.  What would a Vodsel show be like?  Do you have any shows lined up that our UK based readers could expect soon?

PAUL: Currently we are just a recording band.  To do live shows would be interesting, but would involve regular rehearsing and would affect our output I think.  If we were to perform live with just two of us, it might contain a lot of loops unless we got some extra members in.

CHRIS:  We’d hope to create an atmosphere with video backdrops.  I went to see the Finnish band K-X-P recently and was really impressed with the vibe that a few fairly simple back-projections can create.  Sound wise, I’d also be interested in playing with the structure of our songs.  There is a 12+ minute version of “Bloodlines” which has a droney intro leading into the actual song (edited version will be on the “Control” single).  I’d love to explore that sort of thing in a live setting.

You guys were kind enough to give us a bit of a peak of your next single out July 8th entitled “Control.”  What does “Control” mean to you?  How did the song come together?

PAUL:  The song came about in the usual Vodsel way.  Chris sends me the music and I work from that.  I always go for melody first then I’ll try to make lyrics fit.  The theme came about when I was trying to recall a dream I’d had the night before.  Some brief image flashed in my head from it and the more I tried to remember it, the further away it got, and the less I could remember.  This gave the lines for the chorus. The song is about those moments we don’t have control of despite all the technology and knowledge we have.  It’s like a celebration of the fact there is still a lot about our surroundings and ourselves that is unknown.  It actually sounds quite upbeat for a Vodsel song

A couple weeks ago, you guys dropped what we hope is the first of many remixes: The Vodsel goth disco remix of Lana Del Rey’s “Born To Die.”  Having such a different sound in the original, how did you two approach doing this remix?  Are there any other songs you are looking to remix?

PAUL:  This simply came about using one of Chris’s instrumentals and fitting it to Lana Del Rey’s vocal.  I had to cut up the instrumental to fit the parts, but there really wasn’t much to it.  The instrumental wasn’t written with this in mind and on the surface it doesn’t quite fit which makes it interesting.  As we said on our website, Lana Del Rey is usually remixed in a dance way.  We wanted to put her voice to something darker and it does work. I have remixed artists before for competitions so we wouldn’t rule it out.  We do have a lot of unused instrumentals that we could consider in this way.  It was a nice diversion from the norm, but we are more likely to focus on original songs for now.

Our thanks to Paul and Chris for taking the time to fill us in on all things Vodsel!
You can be sure that Fourculture will keep an eye on the Vodsel as they take flight.

Vodsel’s “Control” is out NOW and available on Soundcloud and Bandcamp.