Jean-Michel Jarre, Air and Daft Punk. These are three pretty familiar music acts from France who have charmed their way into the musical hearts of the public. And now it’s the turn of Paris’ own Moon Prototype who, after fifteen years of “depressions and joys,” are seemingly intent on barging their way to the top of the world music pile with their latest, Modern Life Is A Journey By Car. 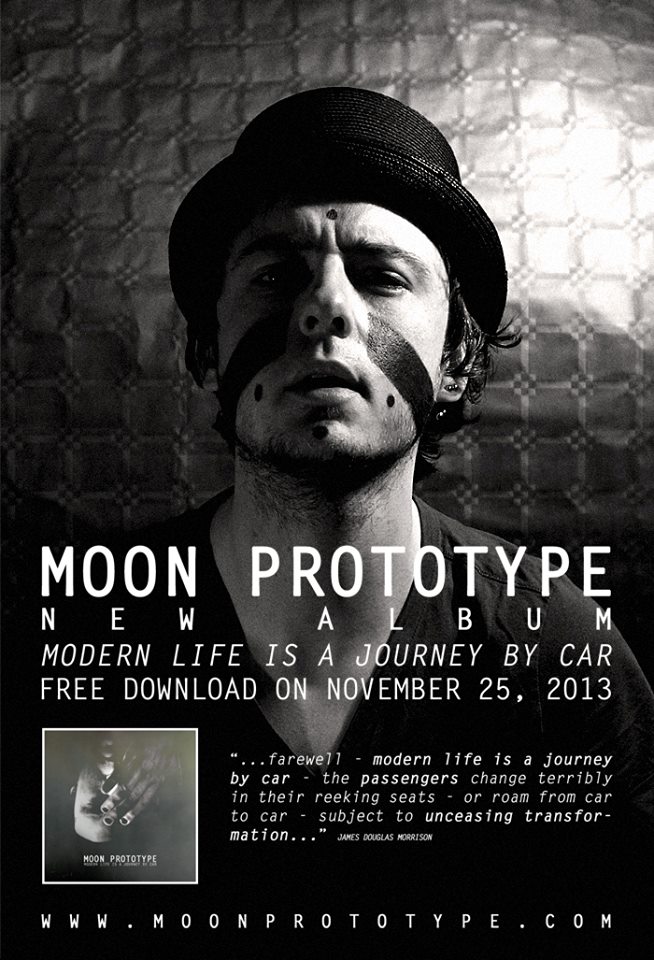 “Introspective” kicks the album off before the guitars and electronica combine on “Coal In My Eyes” in impressively heavy, rhythmic fashion. The third track is “My Name Is The Lord,” a Nine Inch Nails-esque track sampling THAT speech from Samuel L. Jackson in Pulp Fiction before coolly slipping into neat guitars and keyboards with a hint of smooth vocals in the mix. “Keep Everyone Afraid” ups the tempo a notch whilst sticking with the musical principals and a “hey yey yey…” section of the song that’ll be ideal for a live audience to stretch their vocal chords to. There’s also some interesting sampling at the end of the song.  “The Passage” is the fifth track and it’s another number that wouldn’t look out of place in Trent Reznor’s back catalogue with its heavy guitars and growling vocals. “Expression Of Bliss” is indeed an expression of bass. This one is ideal for a fast drive with the windows down and the stereo up. The halfway point of the album comes in the form of “Celebration,” a song of a girl and her desires and the perspective of the willing lover as this song sleazily and slowly gives in to the outcome of the pair’s passions: “There is no need to feel guilty, I haven’t done anything I am ashamed of…” It starts off the electro groove of “This Dream Is My World” that blends with rough samples and vocals keeping in the groove of one of the shorter songs on the album. “The Sinner” is probably the most industrial rock sounding track of the album.  With a rocky edge, the vocals simply flow over the  pulsating beats smoothly. “It’s Better To Burn Out Than Fade Away” is a poignant tribute to Nirvana’s Kurt Cobain who made the quote shortly before his death. The quote is brought to everyone’s attention with the delicious voice of Aurélie Jung. The quiet music accompaniment fits the mood of the song.  The first single off Modern Life Is A Journey By Car is “The Challenge,”  a slow-fast-slow number with a sprinkling of smooth, bluesy guitar that makes it one of the signature tunes off the album. “The Last Straight Line” is a throwback to the late 90’s Massive Attack and their Mezzanine album. It’s  good, solid trip hop music with samples from The Great Dictator no less. The album track, “Modern Life Is A Journey By Car,” is the next one up and it returns to the electro-rock sounds we enjoyed at the beginning of the album. This will no doubt be a single release sooner or later.  The penultimate song is “Staying In Motion,” a song that has Depeche Mode-like qualities from their 80’s heyday but fits in with the modern music times. The curtain comes down on the album with “Dead Man,” a song that feels like it comes straight out of a Michael Mann film . . . and we know how good his films are, don’t we?

Modern Life Is A Journey By Car is an excellent album with tunes ranging from trip hop to industrial to classic electronica.  If anyone is missing UNKLE or Massive Attack at the moment, give this baby a try. You won’t be disappointed. Vive La France, vive Moon Prototype.

Modern Life Is A Journey By Car is available as a FREE DOWNLOAD today!

Moon Prototype on the web: