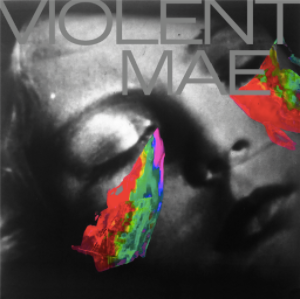 When you first hear “In the Sun”, the lead single and first track on the sophomore album by Connecticut-based duo Violent Mae, you are taken back about 10 years when there was a resurgence of harder-edged, female-fronted, indie bands.  In the shadows of Yeah Yeah Yeahs were often forgotten bands like Metric, The Duke Spirit, and Be Your Own Pet.  Nevertheless, these acts were of the time and perhaps underrated.  “In the Sun” has a nostalgic edge to it, a chaotic familiar fuzz, and makes a change for a new act to be seemingly influenced by this crop of bands.

So, is this sound relevant now?  Is this era due a critical reappraisal?

Well, fortunately it doesn’t matter as the rest of the album does not really follow suit.  Track two, “In My Ring”, has a gnarly, vulgar sounding effect at the heart of it, reminiscent of PJ Harvey’s ‘Meet Ze Monsta’.  This is certainly not predictable and is as welcoming as it is unsettling.

Slower songs are delivered with equal intent, with vocalist, Becky Kessler showing strength in the higher register.  “Away” is slow and hypnotic, like a darker Cat Power,  and title track “Kid” is an epic, soulful show-stopper.  If this works live then it could bring the house down.

There is a nice spontaneous feel to the recording with a few flaws left in to give it that live feel.  It never settles, allowing you to be drawn in, keen to see what lies around the corner.  A range of weird noises here, a few tempo changes there, and while it is by no means easy listening, Violent Mae make the supposedly ‘difficult second album’ not that difficult after all.