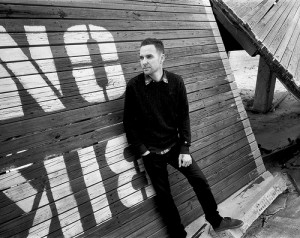 Vinnie Caruana, frontman of punk icons I Am The Avalanche and seminal post-hardcore band The Movielife, has announced details today about his upcoming debut solo release, “City By The Sea,” out February 5th on I Surrender / Run For Cover Records. Caruana will be touring the US in support of “City By The Sea” (produced by Steve Choi from RX Bandits) throughout February on the Acoustic Basement Tour, along with Geoff Rickley (Thursday), A Loss For Words, Koji and Brian Marquis.

Speaking from the boardwalk in Long Beach, NY, Caruana shared the inspiration for his solo debut: “The city was hit hard by Sandy and is doing its best to bounce back. It’s an incredible place to live and the people are proud to call it home. I moved here 3 years ago and intend to remain here as long as I can. I live very close to the ocean and it continues to be a huge inspiration to me and my music. I was very lucky compared to the thousands whose homes and lives were drastically affected by the storm and I won’t ever take that for granted. The boardwalk will be torn down and rebuilt very soon. It’s all part of the healing process.”

Speaking of “City By The Sea,” Caruana says “I really felt like I owed this to myself and to all the people who have supported my music for so long. I won’t let either of us down.”

“Somehow The World Keeps Turning,” the first track off Caruana’s EP, can also be heard here: