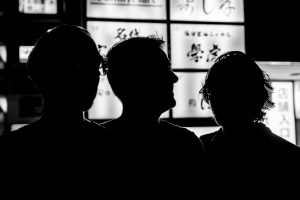 We’re delighted to be able to premier “Downside Up”, the latest teaser from Go March’s forthcoming album.

While it may be half the length of previous release, “Chop Chop” it is no less hypnotic with their customary mesmeric grooves taking you on a more laid back journey this time.

The video complements the Antwerp trio’s panoramic sound, circling band members Philipp Weies (guitars), Hans De Prins (synths) and Antoni Foscez (drums) as the song evolves.  It has an improvised feel but with the postrock polish we’ve come to expect from the band.

“Downside up” seems quite minimalist on the surface, but its strength lies in the repetition with the song building through subtle nuances and synth atmospherics. It’s the perfect blend of space-, math-, and krautrock.

Sophomore album, II is released on 28 September and promises to be a subtle and frantic mix of modular electronics with a European flavour.

Written By
Paul Davies
More from Paul Davies
Pop is a universal language and with lyrics not being much of...
Read More