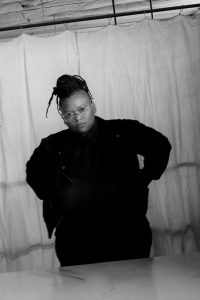 “This project was birthed out of feeling fed up.

From every corner of the home that I live in, messages from a loudspeaker can be heard. “Everything in and around this location is being monitored and recorded”, I am reminded every few hours; every single day. The messages are broadcasted as a result of Family Dollar’s agreement to participate in DPD’s Green Light surveillance program. Because of the fact that I live next door to this Family Dollar, the camera and loudspeaker associated face my porch and all of the windows of my home. Sometimes the messages are live from Detroit’s Real Time Crime Center, a center to which the city of Detroit has allocated at least $12 million to since 2019. It is the headquarters where the footage is streamed to directly for crime analysts to monitor and respond to. At times, the live messages directly address people who stand in front of Family Dollar, “To the male wearing the black coat and the blue jeans who is outside panhandling, I advise you gather your things and exit this property, now. Or police will be dispatched with your photograph and description.”

As a way to move through feelings of paranoia and anxiety around this everyday occurrence and the dark reality of the ways that Project Green Light disproportionately affects poor Black communities, I decided to record the message and respond to it through the use of music and moving image.”

These forewords about the AV work by the artist are from real Detroit, MI in 2022, not from a dystopian sci-fi series. Born and raised in Detroit, Vanessa Reynolds is an interdisciplinary artist who engages intuition through the use of painting, illustration, music (solo and as lead vocalist of River Spirit), tattoos, and film. Last year, their short film Joy Remembers was included in Detroit Narrative Agency’s Ethics & Aesthetics Exhibition at Museum of Contemporary Art Detroit. Most recently, Reynolds was in residence with BULK Space Detroit, a collective dedicated to uplifting the works of marginalized artists in taking up physical and digital space. This is where they began working on a collection of AV works that explore humans’ growing reliance on technology and question the illusion of digital sovereignty. During this residency, they created F.Y.G., a short movie about the omnipresence of surveillance, all the way into their own home.

As an artist and a US citizen, what do past and current new tech developments mean to you?
I come from the generation where the internet first became accessible to the general public in the U.S. I had access to it by the age of ten, and I still remember the first viral video being that of a 3D animation of a dancing baby. It was all over the internet, and TV. I remember frequenting MySpace, then switching over to Facebook in 2004, as soon as it was launched. In retrospect, the only idea that I had of the internet being what it is today was through major sci-fi films. I dreamt of all of the best ways that the internet could affect society; building bridges of communication and expanding possibilities for education. As a self-taught artist in many respects, the internet has contributed largely to my ability to access a knowledge of my choosing. Today, owning a cell phone is like having the world in your pocket. 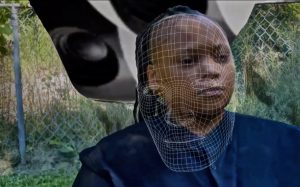 Knowing the world through my experience as a queer Black person in the U.S. it comes as no surprise that the power of the internet could be a dangerous tool for law enforcement. With the need for tighter systems of security increasing on an individual level, new means of verifying identity are being developed with every new year. Even the least sophisticated new smartphones are equipped with multimodal biometrics, such as fingerprint scanners, voice/ facial recognition, and two-factor authentication. Detroit is a place where this technology has been a testing ground for its use by law enforcement since 2016, through Project Green Light; an initiative that places surveillance cameras at immigration centers, low-income housing projects, gas stations, liquor stores, parks, and around 500 intersections at a time, to mention only a few. In the Blackest city in the U.S., systems that have been proven to falsely identify people of color have already been used as the primary source of evidence in at least two wrongful arrests of Black men In this city since 2019. Local activists groups such as Detroit Will Breathe, Detroit Community Technology project, and Data 4 Black Lives have been working to ban the use of facial recognition technology. And as far as I know, at this point, no moratorium has been put in place to stop the abuse of this racially-biased technology.

How do you reconcile the reality of certain technologies through your art practice and through your personal life?
In all honesty, F.Y.G. was birthed from a place of pure frustration. I’ve lived in my current home for about six years now. There is a loudspeaker and CCTV attached to the rear of a dollar store that faces my front porch, where I roam on a daily basis. The live audio and video are transmitted to a location where analysts would respond in real-time to folks in the neighborhood, who stand outside of the dollar store asking for change. The loudspeaker would say “To the male wearing the black shirt and the blue jeans, who is outside panhandling; you are to exit this property immediately, or the police will be dispatched with your photograph and description.” It was incredible to me how blatantly insidious the state of surveillance had become. The other message that I would hear daily, from every corner of my home, sometimes waking me out of sleep- “Everything in and around this location is being recorded and monitored.” This was a daily reminder that eventually triggered my rabbit hole of discovery of what was actually going on in the broader context of social data and Project Green Light. I had no previous knowledge that this was an issue until I was driven to find out why the hell I was hearing this message from the loudspeaker, once an hour, every day. It was something that I felt like I couldn’t escape; the constant fear of being watched. Not only does it perpetuate further criminalization of Black bodies, but it’s also a breach of digital sovereignty for literally everyone. 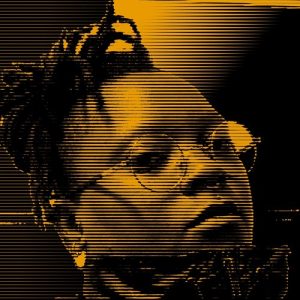 How do you feel mixing your personal life experience and social views in your art?
It is absolutely cathartic. I felt so blindsided and deceived learning that a majority of the images used for searches in police databases are pulled from social media accounts; that the police were willing to use knowingly faulty technology to arrest innocent people. For me, it is a huge testament to the moment we are in where major corporations and police organizations are in a time of reckoning and should be held accountable. I don’t consider myself to be an activist, but the only work that I am called to do right now addresses my experience in this body, as a Black person. This is not a conversation that I think is being had on a day-to-day basis by people who live here. Like I said, it’s been brought to my porch. My curiosity was sparked by being faced with it.

What impact do you want your short movie to have?
For me, creating F.Y.G. has been a way to continue the conversation from my perspective as an artist. I aim to honor the efforts of local Black Detroiters and activists, who have been doing the literal work to advocate for our freedom as individuals on this matter. I hope that it helps to spread further awareness.

What’s next for your artistic work in Detroit and beyond?
Wow, huge question! There’s so much to look forward to. I’ll be working on creating more video work like this, as well as writing new music. I’m looking forward to collaborating with other artists and broadening my sense of what it means to be interdisciplinary.

More work from Vanessa Reynolds on @venusloc and Bandcamp.

Written By
Nadia Says
More from Nadia Says
On the occasion of his new release on Berlin label Wicked Hag...
Read More