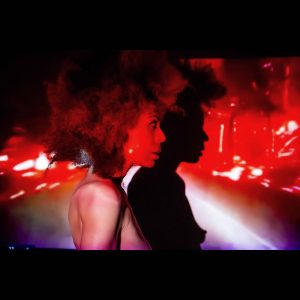 Valerie Renay (half of Noblesse Oblige) is releasing her first solo album on September 7, co-produced by Alexander Paulick-Thiel (Kreidler). One of our favorite Berlin-based French Caribbean performers, painters, and electronic pop chanteuse, Valerie Renay, brings us Your Own Shadow.

After initial help from producer Moses Schneider and Einstürzende Neubauten’s engineer Boris Wilsdorf, Valerie was set on a path where her sound could continue to develop organically, as she traveled solo, testing new material in front of international audiences (Live appearances in Germany, Poland, South Africa, Italy).

This empowering and ethereal album took our Artist D on a dark dreamy trip, so very much that he had to get with Valerie to answer a few Fourculture questions.

A few years ago you released Living in Germany and the track has actually been popping up on the playlist in my car lately. It’s only been making me further excited about your upcoming solo album! Your Own Shadow debuts very soon and is super moving, definitely haunting, and emotionally delicate. Throughout all you have done in your artistic journey on this planet, this is the first time you are releasing a solo album. Why didn’t you ever do this before!?
I have always made music on my own, millions of musical ideas that will never be heard, paintings that will only be seen hanging in my bedroom, performance ideas performed only in front of my mirror. The brain never stops creating. Creations reflecting a state of mind, a moment in time, a mood, a feeling in your stomach, a dream, a desire… However, to actually release one of your creations into the world takes a lot of time, energy and money. There’s also a technical aspect to it, in order to conform and fit into the commercial world of consumerism.

Making a solo album is a very tough and lonely journey, it takes strength and focus, this is why it has taken me so long.

This album covers a period of deep transition for you while dealing with private demons. I understand that what works for one may not work for another, but what would be your advice to people trying to pull themselves out of complete gloom?
I feel incredibly lucky that whatever happens, being creative will always lift my mood. Making music, drawing, writing will always provide a certain relief. It’s the best form of escape, in which you are active and in control. It feeds your brain, nourishes your senses and liberates your mind. The act of creating is so powerful and empowering, I think it’s valuable advice for anyone.

Sailor is the first single from Your Own Shadow. The video is fabulous and has been getting a lot of attention, including moving up the Independent charts. I seem to recall a while back you were looking to borrow some of the props you used in the video. Could you tell us a little about your process for coming up with the concept of the Sailor video?
It was a joint venture with Sebastian Lee Philipp who filmed the video. I wanted the video to be one take without editing, as though it’s taking the viewer on a journey, a trip. In the end, there’s a few cuts but I think a feeling of constant flow still remains. I wanted to film it in my bedroom, somewhere private and intimate that reflects the tone of the whole album. I also wished to bring the viewer into my world, a strange and dreamy place. It’s the power of imagination… the beam of the lighthouse is shining on my face as I search for you on the ocean but I’m in fact standing a few meters away from my bed. Like being a child, you invent a parallel reality to suit your needs. This is very much the spirit in which the album was written.

I borrowed the sailor cap from Rummelsnuff, a wonderful artist I have collaborated with in the past.

Sebastian has a great understanding of my music and knew exactly how to film me and bring my world to life.

I heard you have been commissioned to make a new short performance art piece for “My Body My Rules – Feel The Freedom”. Knowing you and your work I think it’s always been your body and your rules. Tell us about this burlesque evening!
For the occasion, I intend to re-visit the opening section of a show called “Possessed” in which I perform a stylised orgasm in a burka, as I strip down to an overly sexually codified outfit. I’ve often used the concept of ‘Orgasm’ as a tool in performance and sometimes open concerts with one. The way I present it is quite abstract, as it relies on breathing rhythms, physical tension & release, moments of suspension, ideas of crescendo, carefully choreographed moves etc. It holds the pure essence of pleasure and eroticism without any pornographic undertones.

And what’s this about playing a mermaid in an underground movie? Valerie Renay as a mermaid sounds like the perfect combination.
When I met Nikolas Darnstädt (a young and promising director) he told me about his latest film project, a fantasy/Sci-Fi adaptation of “The Odyssey”. He said he could imagine me playing the leading siren and I just couldn’t resist the opportunity. The film will be released in 2019 – look out for it!

Last time we spoke on The Fabulous D Show, we talked about Berlin and how it had avoided immense gentrification, unlike most other fabulous cities. Is Berlin still one of your favorite places to be? Has it continued to nurture the creative people of the underground?
This really is a topical question right now. Things have been changing so fast. Since our last interview, I’ve had to leave my flat. This was one of the most difficult transitions that happened while making the album. After 11 years in my beloved home, I was sadly forced to leave because of gentrification and I’ve just learned that I will be kicked out of my new place (after less than a year) for the very same reason, once again. Finding accommodation in Berlin has become increasingly difficult. This is a serious problem that I think will greatly affect the lives of creative people in the city, the most.

Clearly you are keeping busy as an independent artist and I am always so happy when an artist gets to live their life doing their art. Will you be touring with Your Own Shadow? Are there live performances scheduled in the near future in any specific cities?
I am really hoping to go on tour internationally to present the album. For now, I have DJ sets and theatrical work planned. I will be appearing at the English Theatre Berlin in an adaptation of “La Ronde” by Arthur Schnitzler at the end of November. I am creating music and soundscapes for a Butoh dance solo, performed by Yuko Kaseki at Dock 11 at the end of October. Plus, I will perform “Aids Follies” (J. Müller / P. Rinnert + G Von Lilienstern), a contemporary opera/revue/lecture performance presenting a global cultural history of HIV in Stuttgart and Vienna, in 2019.

Order Your Own Shadow at Bandcamp now!