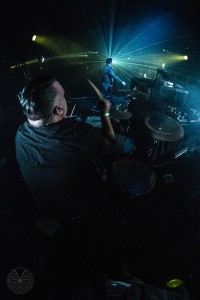 Vain Machine members, Omar Quinones and Beau Baker, may draw sonic inspiration from industrial and EBM artists such as VNV Nation, De/Vision, Nitzer Ebb, and KMFDM, but with each new track they continue to create their own innovative niche in the EBM and electro-industrial music market. On “Eat You Alive” they create the lush, layered sound, dirty-driving bass lines, and rhythmic electronic drum for which Vain Machine is known, and mixed it with bright bursts of infectious synths. It’s a track that grabs you from the start, the pulsating beat compels you to bob your head to it while the driving bass and hypnotic vocals take you to a dark and moody space. With “Eat You Alive,” Vain Machine once again proves their ability to create electro-industrial music that is driven, edgy, and fierce.

Vain Machine is currently working on their second full-length album, scheduled for release in 2016. You can follow them at the social media links below to keep up with all the latest.