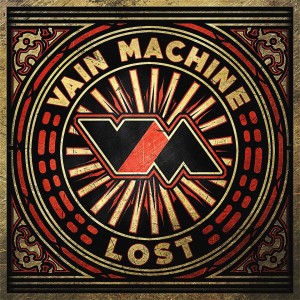 When it comes to electronic music, there is always one thing I listen for that is oft-times missing: the human element inside the machinery. Sure, there is always a catchy hook that overstays its welcome, thus fatiguing the ears. And then there is the trance inducing loops of industrial noise that leave people too worn out to dance before their feet ever hit the floor. In short, too much substance without any style or sensibility to its surroundings.

And then there is Vain Machine.

Electro-industrial with a dark and heavy edge, Omar Quinones and Beau Baker have all of the substance, without sacrificing style & sensibility to create a “wall of impending sonic doom” sound. While it is hard to compare Vain Machine to anyone else, the title track “Lost” and “So Much for Fate” have the feel of Concentration era Machines of Loving Grace.

While having all of the hooks and earworms of infectious synth-pop, I wouldn’t even say it is in the same neighborhood. The bass is more ripping, the drums have that snap to them, but the synths are dirty & sleazy. Samples are aptly applied, and the resonant tone throughout the first 7 songs on the album (which are new) have that eerie vibe to them. If you listen to in the dark you may begin to see the orbs you hear in “Fade Away.” I confess, by the time I was finished with track 6, “Broken”, I had been sucked into the Vain Machine. This is the kind of electronic music I live for: edgy, driven and fierce!

Strongly influenced by the likes of Nitzer Ebb, VNV Nation and KMFDM, Quinones and Baker have quickly risen up a reputation to be proud of. September 2014, Vain Machine signed with UK-based independent label AnalogueTrash after having played live for less than a year. In that time though, they played some coveted slots, including opening for legendary German electropop act De/Vision.

If you’re a fan of Machines Of Loving Grace, VNV Nation or edgy pop-infused dark industrial ala Deathstars, you will be picking this up on disc and if the gods be gracious, on precious vinyl. I can only imagine how much more this could blow minds coming from a hot slab o’ wax. Vain Machine will be breaking the sonic barriers in 2015, which I guarantee.

Aside from the 7 new tracks, the album contains remixes from the likes of Nordika, People’s Theatre, David Burdick, and Assemblage 23.