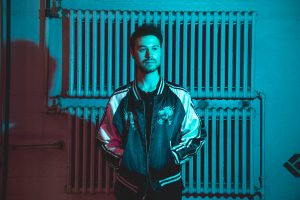 Brooklyn-based midnight newbie Unknown Caller – the moniker for producer & songwriter Alex Lichtenstein – has delivered an impressive debut effort in the form of the single “Sayonara.” The track is a dreamy, extremely chill-yet-danceable banger. It’s the kind of song that makes you want to head out for the night with no intention of coming home before the sun rises. It’ll take you back to 1984, to the club scene in Terminator when Sarah Connor first gets saved by Kyle Reese.

Before the genesis of Unknown Caller, the young producer & songwriter spent his nights recording basement punk demos with friends in his hometown of McLean, Virginia, and gigging around DC with various bands. After graduating high school, he left the Beltway and migrated to NYC to study Music Technology at NYU. The city’s diverse musical landscape, in addition to handling A&R at Cult Records and meticulously listening to demos, pushed Unknown Caller to experiment with his sound and hone his production craft.

The initial results are fantastic, and we can’t wait to hear what follows. Lichtenstein says on the track, “The summery song was ironically conceived in the winter—on the other side of the world. After a trip across East Asia, I broke hiatus and resumed my passion for music with a different perspective and source of inspiration. The song is influenced by observations, sounds, and conversations with locals made across Taipei, Seoul, Kyoto and Tokyo.”