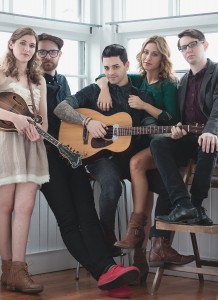 Tis the season of gift giving and merry-making. And the Nashville-based folk band Twin Forks want to do their part to make sure your holidays rock. After wrapping up this year touring with Counting Crows, the group heads into 2015 for a January tour with Jukebox the Ghost, followed by a tour in February and March with Lucero and Ryan Bingham. In the mood to spread some holiday cheer and celebrate their three tours, the band is giving away three songs: “Back To You”, “Kiss Me Darling”, and “Cross My Mind”.

So go ahead. Celebrate the holiday season and ring in the new year with a free music download from Twin Forks. And be sure to check out their upcoming tour schedule for a show near you. Because getting tickets now is sure to make everything  merry and bright.