My name is Turk Berain. I am a private investigator. You may not recognize my name because through my long, storied career I have also been known as Skippy Pigholder, Rolly “Raisin” Bran; California Cystsurf, Maurice Calibaster, Stuffy Soupspoon, Jake J.M. Siffenhauser and Pete Paragon. Sure, there were other names but I would rather get into this story, one of many I have written and will continue to write, whether you like it or not.

It was deep summer, when the sun shines so bright you can see a person’s ribs through his or her shirt and the air gets thick and moist, like a barbequed steak that is cooked medium with a bit of red on the inside. Everyone I knew was staying indoors or buying air conditioners at a sale in a department store that was air-conditioned. I didn’t like intense heat, it was one of the reasons I never became a fireman.

This story seemed as if it was going nowhere when suddenly I heard a loud whoosh followed by a loud crack. On my wall across from the desk was an arrow still vibrating from the impact. I ducked and looked out the window. I saw a figure running down the street and wondered if that figure was the person that had shot an arrow into my office. There was no way of telling, especially if I stayed in my office.

I got up and I looked at the arrow. It was a crossbow arrow. Archery has never been a hobby for me but I knew one thing—the arrow was a Pro Lite, 20-inch, 22/64ths diameter carbon fiber arrow which was fletched slightly offset with an EP-40 Elite Plastifletch 3 7/8ths-inch vane. So, obviously, it was fitted with a 25-grain aluminum insert. Anyone could have described that but no one could have predicted it would be shot into my office. No one. Not even Nostradamus, who is said to have made many prophesies.

I tried to jerk the arrow out of the wall but the stem broke and I took a splinter to the thumb. This was one of the many moments I regretted becoming a detective and not a crop duster or a snake milker or rented mourner or an electro-shock specialist or at the very least, a flatulence smell reduction underwear maker.

For sure, the arrow was meant to impale me, perhaps with the intent to kill. Someone was after me and decided to make my death colorful, using a crossbow instead of a two-by-four with rusty nails protruding from one side. Or a gun. I knew I was in danger, so I put on my socks and searched my desk for a pack of cigarettes. That was when I was saddened by the fact that I had sworn off smoking only days ago. Then I became pissed off because I had just enough will power to have not thought about it until now, just after I had come within a few feet of death by crossbow.

I looked out the window again and saw another figure running down the street. Again I wondered if that figure was the person that had shot an arrow into my office and again there was no way of telling, especially if I stayed in my office. But I stayed in my office, even with my socks on in the torrid heat.

I turned on the radio and the weatherman confirmed what I thought, reporting that “This is torrid heat, listeners of weather reports on the radio, and it is dangerous to be outside in the torrid heat if you are engaging in physical activity. Of course, it is also dangerous if you are sitting anywhere and have arrows shot through your window.”

What detective worth his saltshaker wouldn’t have known then and there that the weatherman on the radio was a major suspect? Of course it could have been he who shot the arrow at me with intent to kill. Who else would have mentioned archery during a radio broadcast?

It was just then that the weather report on the radio ended and a disc jockey’s voice said, “And now, here’s the big hit, ‘Cupid’s Arrow,’ by The Crossbows.” I sat back in my chair and thought, right, The Crossbows. I had purchased their first album that featured their other hit, a cha-cha version of “The William Tell Overture.” Then something else came to mind. Of course, I thought, William Tell was a famous, if not the only famous, character of literature that used a crossbow.

If I could only connect the facts to complete a sound conspiracy I would easily know who had shot the arrow. For their were still doubts about the weatherman being the culprit. It could have been the disc jockey or any survivor of The Crossbows, a group that disbanded a decade ago after a bad fall down a flight of stairs.

As I put my feet back up on my desk I felt the closeness of the air, the sweat dripping from my underarms and my own musky smell wafting into my nostrils. All of this was disgusting. I began feeling nausea when suddenly the front door of my office, which was the only door to or from my office, swung open. Though I enjoyed the slight breeze the door’s quick movement created, I was startled. Sliding back on my chair caused my feet to drag off of the desk and that gave me two more splinters.

It was Cautious McGiffbonder who swung the door open so violently. His office was next door to mine. He was a freelance bookbinder and a good friend who picked up checks when we had meals. But he looked different today and dangerous. There was something about him that unnerved me and made me suspicious that he was in distress. I began to think if those impressions were being made by the fact that he was holding a crossbow.

“I’m sorry, Turk,” Cautious said. “My crossbow accidentally went off and fired an arrow into your office wall.”

“Yes, Turk, and I am sorry. You see I was thinking of giving up bookbinding and going into crime so I bought this crossbow. When I was on my way back to my office I loaded the crossbow and it went off. I shot a Pro Lite, twenty-inch, twenty two and sixty fourths diameter carbon fiber arrow which was fletched slightly offset with an EP-40 Elite Plastifletch 3 7/8ths-inch vane into your office. That’s when I realized how dangerous going into crime could be for me; certainly more dangerous than bookbinding.”

“You were right to come to me and confess, Cautious,” I said.

I took the crossbow out of his hands and he began to weep as I led him down the stairs and to the police station to book him for attempted murder. I was still sweating profusely when I left the station, dreading the fact that I would have to call his wife and tell her what had happened, how her loving husband had fallen to the tempting promises of lawlessness, felony, fraud, misdemeanors and wrongdoing. She would cry and it would be sad and the evening would bring no relief of the torrid heat that melted the hearts of everyone in the city. 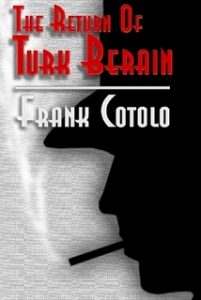 This story is a new adventure and appears in Fourculture for the first time anywhere.

The hilarious book, “The Return of Turk Berain,” with many Turk Berain adventures, is available at LuLu.com.

Written By
Frank Cotolo
More from Frank Cotolo
After living in morbid cities, where dangerous moments are spawned around every...
Read More