There’s not a lot you can add to what has already been written about Joy Division.  Especially when you have someone as verbose as Paul Morley as the go-to writer when it comes to their books and sleevenotes.

However, True Faith, the new exhibition on Joy Division and New Order at Manchester Art Gallery, is not simply about facts or opinions, but more about their impact and influence on the art of others and opens up new angles and interpretations.  Any fans who are expecting a retrospective of the music should be warned that this is all about the cultural and visual legacy.

Set out in monochrome spaces with a few dark projection rooms, the exhibition brings together paintings, installations, and short films inspired by the two bands.  The exhibition has been curated by Matthew Higgs, Director/Chief Curator of White Columns, NY, author and film-­maker Jon Savage, and archivist Johan Kugelberg and is part of the wider Manchester International Festival.

The most familiar elements in the exhibition will be the bands’ sleeve designs from Peter Saville which are on display here from his own record collection.  The original of  Fantin-Latour’s  A Basket of Roses (inspiration for the Power, Corruption and Lies album) is also here, on loan from the National Gallery.

With the dominance of grey wall and black frame surroundings, it is the gig posters and record covers that add the colour.   Drawing from classic and contemporary design, Saville’s seminal prints complemented the music and create that rare aesthetic symbiosis between music and design which actually spread across pop culture spanning from post-punk to acid house and beyond. 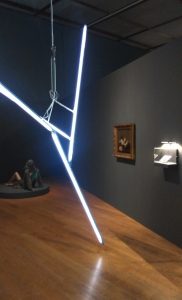 Throughout the exhibition our own preconceptions are teased through a range of sensual stimuli.  In flickering, grainy video shorts (Slater B Bradley’s Factory Archives (2001-02) and Ghost (2001) ), the lo-res quality of the images of Ian Curtis tantalise and add an other-worldly, almost sinister aura around him.  Those common themes of detachment and isolation, well-commented on in Curtis’ lyrics, are strengthened here but they are subsequently cast aside when we view him in more familiar live concert surroundings.  In a powerful video performance of “Dead Souls” at the Manchester Apollo in 1978, it is Peter Hook who has his back to the audience while Curtis owns the stage with his hypnotic, awkward dancing that actually exudes a joyful release of euphoria.

There are plenty of curios within the exhibition; there are several fan-designed record covers, promotional posters and rarities, but the true gems are the more personal ones – a section from band manager Rob Gretton’s notebook and handwritten lyrics (with crossed out amendments) from Curtis himself.

This exhibition shows the influence beyond the music but if you want to see the preconditioning factors that influenced the band and Manchester as a whole around that period, then the street photography exhibition by Shirley Baker (also now on at the Art Gallery) is a must-see.  Her photographs of the declining communities and urban clearance programmes of inner city Manchester and Salford depict the climate that inspired many bands, particularly those in the late 1970s.  It is sad but fitting to note that the Factory building is now dwarfed by neighbouring sky-scraping hotel chains and new-build student developments, yet the ghost of influence remains at the heart of the city.

To coincide with the exhibition, there is a Joy Division documentary and discussion at Home, Manchester on 11 July, and New Order will take over Stage 1 of Manchester’s iconic Old Granada Studios to play a series of intimate gigs.  The shows are created in collaboration with visual artist, Liam Gillick.

The exhibition and parallel events are part of the Manchester International Festival (MIF), which launched in 2007 as the world’s first festival of original, new work and special events.  The artist-led festival occurs every two years and presents new works from across the spectrum of performing arts, visual arts and popular culture. MIF has commissioned, produced and presented world premieres by artists including Björk, Steve McQueen, Robert Wilson, Wayne McGregor, Maxine Peake, The xx, Zaha Hadid Architects, Damon Albarn, Punchdrunk, Elbow and Marina Abramović.

If you’re not in Manchester you can still enjoy Festival events. Experience MIF live and online at mif.co.uk/live

Written By
Paul Davies
More from Paul Davies
With Mark on holiday you have got me bringing you “My Four”...
Read More