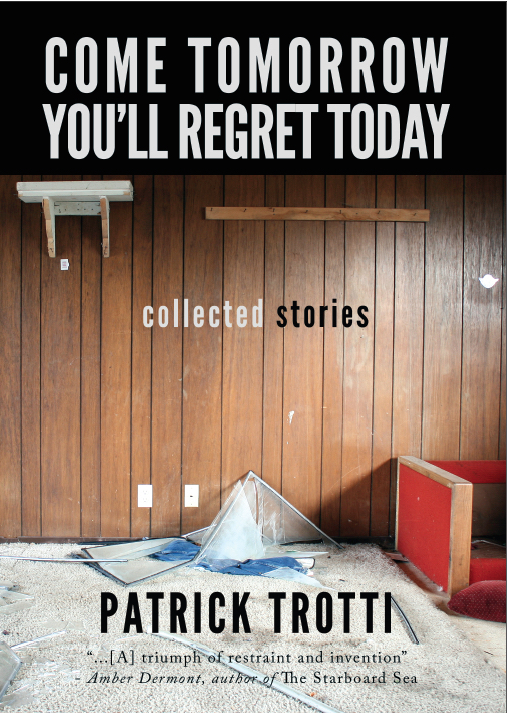 The last year has been exceptionally busy for author Patrick Trotti. Since June 2014 he’s had a novella, The Day The Cloud Stood Still, a novelette, it all ends in tears anyway, and a chapbook, Fracture(d), all get released by various small print publishers. Next up in his packed publication cycle is Come Tomorrow You’ll Regret Today, a collection of short stories to be published by Tailwinds Press in June, 2015.

In this rapid-fire collection (my review copy checked in at a brisk 210 pages for 20 stories), Trotti embraces the concerns of modern living. Facebook makes a frequent appearance, and the ruins of the U.S. economy hangs over many of these stories. These newer elements are balanced by that most familiar vice of literature, booze. For in these stories Trotti establishes himself in the tradition of Raymond Carver and Denis Johnson, or more modern touchstones of Donald Ray Pollock, Patrick Michael Finn, and even the band The Hold Steady. Many of the narrators and protagonists drink their way out of their problems, fumbling through a townie existence that revolves around never managing to escape your own past. Familial obligation is a constant weight throughout these stories, driven either by blood, youthful brotherhood, or the ragged ends of relationships. But these familiar concerns are then dragged forward into the 21st century, with hollowed-out men obsessing over what a Facebook chat message means or discovering their high school sweetheart on a porn website.

The collection is divided into three parts, though the reason for this isn’t clear in the text. All three sections are united in voice, an unadorned style that has no time to spare for tricks. The stories in each part feature either kids forced into adulthood or men overwhelmed by that same adulthood, which never gets easier. The unselfconscious style of the collection leads to small moments of beauty, like “Your spring self is anxious to shed your winter mistakes” at the end of “A Promise is Nothing More than a Future Regret”. The straightforward prose surrounding these little gems only allows them to shine brighter.

In fact, Trotti’s style is so dominant that the success of individual stories rests in how well their content meshes with the narrative voice. The standout story in the collection, “The Ties That Bind Us”, successfully brings together so many of the elements that Trotti plays with throughout: a main character recovering from addiction and too aware of his own failings, the obligations of family, and a constant undertone of class warfare. Here the blunt, self-destructive tone of the collection aligns perfectly with the main character, simultaneously driven by discontent with his circumstances and self-loathing for the fact that he only has himself to blame.

These concerns of small town life we return to often in Come Tomorrow. But I can just let Trotti himself describe his repeated milieu, as he so wonderfully captures in “They Went”:

All of their fathers worked at the local plant and many of their mothers worked odd jobs as waitresses or secretaries. Their houses were small and decrepit. The rooms were full of outdated appliances and secondhand knickknacks, their parents fearful of parting with anything of potential future worth. They’d been taught to repurpose things. Frugality reigned supreme. Survival was their religion. The ability to get through another day was the only trait passed down.

This, ultimately, is the world that most of his characters live in. The boys’ friendships are based on how “clenched fists were their secret handshake,” and a cliff diving right-of-passage is a “white trash Bar Mitzvah.” They then grow into the men who are “both here, stuck in town, idling like a beat-up Cadillac.” This is Trotti’s unadorned prose at its finest, simultaneously celebrating and tearing down the small town life. Here is the base of the self-loathing that all his characters experience, blessed just enough to see beyond the town limits without being granted the opportunity to actually leave.

But as often as story and voice align, the lack of frills sometimes works against the text. When the stories slow down, there’s not enough interesting language on the page to fill the space. “Wal-Mart College”, the second piece in the collection and its longest, makes you feel each page with its step-by-step examination of a young man deciding to apply to college. There are interesting beats scattered throughout, such as the young man making his college application choices based on mascot or the mom plotting behind his back to keep him at a local community college, but these are separated by paragraphs over-explaining his every option. In other pieces, the prose is so bare that there’s no subtext left, the narrator flat out telling us the emotional beats of the story: “It hadn’t occurred to me before this. This was my first experience with death in the Internet age. The emotions seemed less real through the lens of social media.” It feels like Trotti underlining a feeling that he should just trust his own words to get across more subtly.

Generally, the shorter the story, the better. The flash fiction piece late in the set,  “Suburban Weapon of Mass Destruction”, a brief three pages’ worth of text, only has enough time to show us the survivor of a car crash swallow down the illegal substances that caused the wreck while ignoring the likely casualties in the other car. And yet its quick, economic sentences and capturing of a horrific moment linger with you. When Trotti is on point like this his stories carry a sharp edge with them.

Ultimately, this collection is wrestling with what the classic ideal of masculinity means in a modern age. In a different generation these same men (and this is a collection about men, or boys becoming men, make no mistake; only three of the stories feature female protagonists, one of whom is fixated on her husband and how she defines her worth against him) would be polishing off bottles of gin at Carver’s kitchen table or moonshine in the hollers of Pollock’s Ohio; now they do it in front of a high speed internet connection. It is a solid collection, one that gains in confidence as it progress, and promises even more from Trotti as he presumably keeps up his furious pace of publication.

Written By
mensah demary
More from mensah demary
I’m standing near the edge of the subway platform. I’m behind the...
Read More