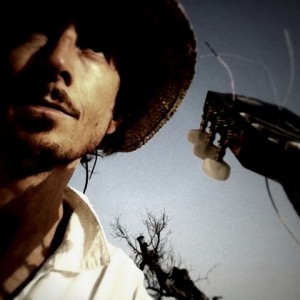 His is a distinctive flair: Gospel-wooing, jangle rock-blues with voodoo-hues and a cinematic air. London, UK’s Blair Jollands (via New Zealand) soars from the haunting alt-countrified territory of twang and reminisce up through to soul-pop smooth, oftimes growling Euro-vamp operatic. His voice compared at once to Rufus Wainright, he cries this side of rock (and Nick Cave) than theatre. A vocal reach like David Bowie, Jollands is not imitating anyone. A music veteran spanning five albums, gigging from South Pacific to America and back to Europe, whose bread & butter is to cast/compose/create music for films, Jollands soundtracks our bellowing souls by mining the rich terrain of our bleeding hearts for sonic gems that he swirls in romantic edge, Spanish flourish and powerful sexy appeal. Sultry and danceable, this is original music that moves and grooves you.

Blair Jollands’ upcoming LP will be released for late Spring 2014. Listen to preview tracks at www.blairjollands.com. Check back at Fourculture for an interview with Jollands before his February 14th show in London, UK at the Hope & Anchor (A GoodSoul Promo Event).