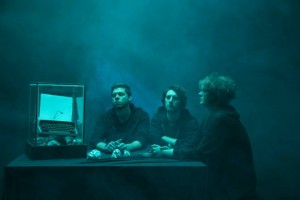 The band, comprised of Daniel Cross (vocals, guitar, programming), Jason Fletcher (drums), and Jamie Kendall (sampling, visuals), have been busy cultivating their gritty, hypnotic sound both in the studio and while sharing the stage with Psychic TV, Queen Kwong and God Damn at various shows and festivals. With this release, Little Death Machine is set to make their mark on the electro-punk scene. Look for them on tour in the UK this Spring.

Singer Daniel Cross took us behind the scenes of Dreaming in Monochrome track by track. Check out what he had to say below.

I Was Yours to Keep

“The whole concept of Dreaming in Monochrome came from trying to document our live performances. The way that we produce music comes largely from a digital palette. Obviously this gives us almost endless options but I found the idea of placing limitations on us by putting us in a live setting really appealing for a record. I’ve always really loved the energy captured on recordings by bands such as Fugazi where you’re completely focused on the moment and I wanted to emulate that both on audio and film.

The majority of the songs on the EP are actually quite old.  Although I write very quickly, the way that we produce the music is very time consuming and often a process of trial and error. This song originated from accidentally misinterpreting the chords from ‘California Dreaming’. It’s definitely one of our heavier tracks. We opened gigs with it for quite some time and it seemed like the natural opener to the EP.”

“‘Healthy’ started its life as just a bass line. It seemed to have a groove that a lot of our earlier tracks didn’t. It grew quite quickly and organically but the ending really threw me. It took a really long time to get right and had several incarnations. I like to play with song structure and after the innocent sounding middle eight it just seemed too easy to return to the chorus, it needed to implode. Lyrically the whole EP comes from the same source of a few events from my past.  It’s all very personal and I would say that the title of this track is definitely ironic.”

“Ever since I was young I’ve always had a very uncomfortable relationship with sleep. More often than not I will fall asleep then suddenly wake ten minutes later with vivid memories projecting and replaying in my head leaving me unable to sleep. I wouldn’t say that the song was a cathartic response but more a document of the situation; it’s a mirror. Again, it’s an older song and I accidentally wrote the progression while I was trying to make my guitar sound like a harp.”

“My writing process tends to use our studio as one of the main instruments. I spend days creating textures trying to find the spark which can turn into a song. The demo for ‘Purgatory’ happened very quickly late one night at the end of one of these sessions. I think I first found its root around 11 pm and by 1 am it was pretty much finished. I don’t think it could have happened at any other time as it completely fed off the midnight air. We only decided to record it for the EP a couple of days before as we were saving it for our next project but it’s very much the sister of ‘Night’.”

“My friend Drew (who appears in the Night video) and I half-formed a band a few years ago. We only had one proper session for it but ended up writing ‘Drug’. We jammed out the structure for hours and I remember sitting down trying to find the chorus and he just came out with that line. It was really strong and just sat perfectly with the mood of the piece. As I said I really wanted the production of the EP to purposefully have limitations and with the mix of this track I wanted to push those limitations as far as they could go. It’s naturally quite a rocky song but that style of production doesn’t really feel like us, but we took those dynamics and placed them into a more electronic headspace.”

Loving Dreaming in Monochrome?  You need to get your hands on the deluxe edition of this release which is only available via their website.  Each edition features a USB containing tracks and live videos, as well as a band-made screenprint and limited edition tote bag.  Hurry! This multimedia package is limited to just 100 copies.

Dreaming in Monochrome is also available on iTunes, Amazon, and Spotify