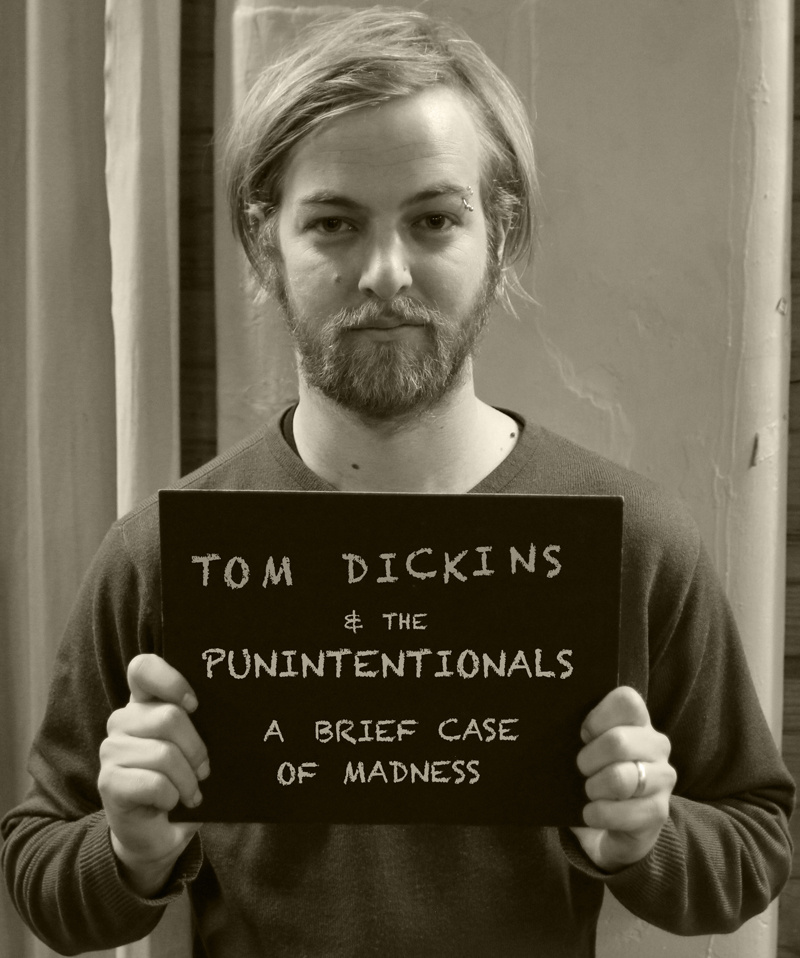 Little did you know it, but you released an album this month. No, seriously. It was the album that you helped create. After a successful 2012 Pozible campaign that reached a stunning 25,600 AUD in a month (roughly $23,500); the one and only Tom Dickins dropped his debut full-length album this month, A Brief Case of Madness, to the general public this July, and on August 16, you can get it right to your door through his Bandcamp page.

For those of you who are unfamiliar with Tom’s work, apparently you haven’t caught up on your Fourculture reading! We had a fantastic interview with him in issue three. For this record he didn’t go at it alone. Tom brought on a team of talented musicians consisting of Sally Christiansen, Gemma O’Connor, Thomas and James Devery, and Stive Collins; you can just call them The Punintentionals.  The album title, a pun alluding to the red briefcase that contains Tom’s writing books and the hundreds of songs written within them, is no joke. To make the album, Tom had moved to the small town of Woodend; clearly the atmosphere of the country made a real impression on this album.  With his trademark laid back indie folk/alternative style, the album is sure to please fans from start to finish. Of course you’re going to love the album–it’s yours, after all.

With any Tom Dickins song you’re going to get a handful of rich instrumentation. The track “Swollen Pride” is the best example of how to use instruments to their fullest. Full of vocal aggression within the theme of pride and lust and intense vocal projection, the surprise lies in a quick change of tempo around the bridge of the song. The best way to explain the change is Tom taking your heart rate on a marathon run, then stopping you right in the middle when your heart is pumping to the point of exhaustion to allow your pulse to slow. Then–BAM–right back on the next half of the run.

Another song that really tugs some heart strings is “Sad for the Weather.” The song comes off as a story of distant or lost love, a depression that comes in seasons for the one who can’t see the one she loves until he arrives back home. With the lack of percussion in the song, you hear more emotion in the voice of Tom and his backup singers. Overall, it’s a very beautiful song that, if done in an acoustic version, would give off just as deep of an emotional vibe as the original version, maybe even deeper.

Tom Dickins and The Punintentionals have a talent that can rip at your soul. “A Brief Case of Madness” is sure to be a smash among his fans new and old. Take a listen for yourself; who knows, you might just get “The Itch” to buy it. Yes, that pun was intentional.

Tom Dickins on the web: