Having surpassed ten million views on YouTube, Daniel Waples is one of the most recognizable street performers in the world today.  He is also one of the world’s foremost Hand Pan players.  Travelling with his Hand Pan — a unique instrument that resembles a UFO more than an implement of music making – Daniel has performed with a vast array of fellow artists on street corners and on stages around the world.  At last count he has performed in about 40 countries including India, the United States, Russia, Japan, most of Europe and in the Middle East. 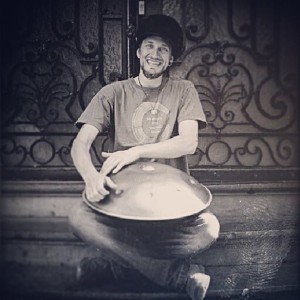 And just this month Daniel officially released his latest album ‘Lisn, a gorgeous and diverse collection of original Hand Pan compositions. Desiring to create an emotional and spirited musical journey, Daniel recorded the album with the help of ten (10) talented musicians, some playing instruments as unique as his own.  I admit that before being introduced to Daniel’s music, I was unfamiliar with the Hand Pan and did not know what to expect from this album.  Assuming (incorrectly) that it would be of the “meditative music to chill out to” genre, I was completely blown away by the rich and diverse sound that Daniel achieves on ‘Lisn.  At times evocative and soulful and at others uplifting and foot-tappingly dance-worthy, ‘Lisn is a brilliant showcase for Daniel’s songwriting as well as the sonic complexity of his instrument.

Whether a track steeped in Celtic rhythms or the Cajon of Peru; one evoking a mystical Kabalistic melody or the visceral beats of Africa; each track on ‘Lisn is a richly layered musical treat.   A few of the highlights on the album include the first track, also one of my favorites, “Petit Son.”  With a rhythmic melody laid down by Hand Pan and double bass, and the violin weaving around and through it, the spirited track builds to a frenzied tempo towards the end that let’s each instrument shine without detracting from the cohesiveness of the whole. “Cajon” is another awesome track, yet with a completely different sound.  Featuring the Hand Pan, violin, guitar and bass, this song begins with an almost Middle Eastern sounding rhythm to which I freely admit dancing around my kitchen more than once.  “Midnite” is a gorgeous, emotional track on which the violin is so exquisite that I invariably find myself listening with closed eyes, right hand raised before me as I silently conduct along.   Other tracks of note are “Einsof” for its evocative and soulful sound courtesy of the Armenian Daduk and “Lago,” where the introduction of recorders and mandolin work together to create a track that could easily fit on the soundtrack of a Hobbit or other fantasy world movie.  The only song on the album not written by Daniel, and as well the only one with vocals is the last,“Shoheen.”  A lovely song written and sung by Su Hart of the world fusion group “Baka Beyond,” it features Daniel on Hand Pan as well as strong percussion, bass and guitar accompaniments.

In my opinion all you need to know about this album is in the title: ‘Lisn.  An album for anyone who appreciates good music regardless of genre, it is also for those who enjoy discovering talented new artists and unique musical instruments.  You can find more about Daniel’s fascinating journey to becoming a world-renowned busker in the upcoming Issue 10 of Fourculture Magazine.

‘Lisn is now available on Bandcamp!
Making a payment for a download of this album will automatically enter you into the Hang Raffle,
which the main prize of will be Daniel’s PanArt Hang.

Daniel Waples on the web: