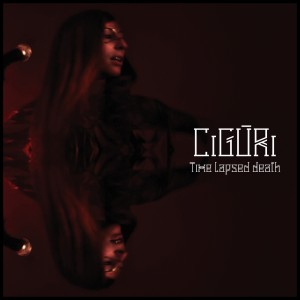 CIGÙRI, also known as Alice Paradisi, was a successful fashion designer in France when she decided to move to Berlin to pursue a career in music. Her stage persona CIGÙRI is a shamanic spirit the Tarahumara tribe believe opens their eyes to the truth during a peyote-laced ceremony. With her debut album “Mare Nostrum” in 2014, CIGÙRI introduced her signature dark pop sound and the unique visual elements of her live stage performances.

Opening track “The Departure” is an hypnotic song that showcases both the dark electronic vibe and haunting vocals that is CIGÙRI’s signature sound. “Almost Dead,” the second track on the EP has an intense, foreboding feel to it and a chanting element that sticks in your head long after you’ve finished listening to it. The third track and first video, “Night Keeper” reveals a light, almost ethereal sound that is grounded by a steady driving beat underneath its haunting melody. The spectral sounds of Kerta’s self-made percussion instruments, including chains dragged across steel, and Cigùri’s chill-inducing vocals compel you to enter their magical world. This may be my favorite track on the EP, although I also really enjoyed the slow, melancholy audio track “Sleep.” It’s an emotion-laden song that actually left me feeling slightly bereft by its end.

The last track and second video is “Small Feelings” and it has a more experimental, electronic sound, held together by driving percussion. The video opens with pounding tribal drums and scratchy distortion from Kerta’s electric guitar. Wearing the costumes created by CIGÙRI on a smoke-filled stage, both performers embody the aggressive, discordant energy and sound of this track.

The on-stage chemistry between CIGÙRI and Kerta successfully merge electronic, natural, and industrial sounds to create intimate, soulful music and a powerful live experience. A talented musician and artist, CIGÙRI creates more than simply music. After watching a video of the complete Time Lapsed Death concert, I felt like I had just watched an intense theatrical performance that I needed to see again in order to appreciate all the nuances of the complex story being told.

This EP has a lot to offer anyone appreciative of a complex, layered palate, even if dark, electronic music is not normally your thing.

You can check out the video of the complete Time Lapsed Death concert below.