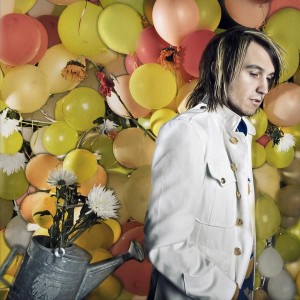 Relationships are balls of emotion that bring one up and down. Sometimes, the person you end up will drive you emotionally into a ditch. Other times, you may even find the person you’ll spend the rest of your life with. As we all know relationships are a commitment that takes a long time to build and grow from.  Tim Myers, former and founding member of One Republic, takes you through an entire year of a relationship with his new concept album entitled The Year.

There is a very strong chance you’ve heard Tim Myers sing, but just had no idea who he was. Myers spent four years with the platinum-selling pop-rock band One Republic, co-writing songs like the worldwide smash “Stop and Stare.” Despite the band’s remarkable success, Myers decided to pursue his dream of branching out on his own. Since leaving the band, Tim Myers has become one of the most licensed solo artists to date. His music has been featured in several commercials, hit TV shows like Grey’s Anatomy, Ugly Betty, and Modern Family, and several movies including Magic Mike, The Dilemma, and Friends With Benefits. For his latest endeavor The Year, Tim Myers takes us through a multi-genre experience of what it is like to endure the ups and downs of a relationship. The album is set up to tell the story of each month, each track is named after a month of the year. Just like the perfect concept album, it would be hard to listen to it out of order, so bring on the first of the year.

Opening with a cinematic explosion of traffic, a heart monitor, babies crying and speeding orchestra straight out of your favorite cinematic classic; “January: Gotta Get Outta Here” a track that brings the heartbreak of leaving a past relationship. Going in, you’re asking yourself what is going on. How did we get here? You feel the pain of Tim’s lyrics with heavy crescendos of the orchestra as he sings “My whole world is falling apart.” He keeps repeating “Gotta get out of here” as if something has gone completely wrong or he’s trying to escape the problems of his past. He does a great job of leaving you wondering what’s going to happen next, just like a great movie.

For the sake of time (as it shouldn’t take a year to tell you about the album) we move on to the springtime’s “April: It’s My Life.” Springt seems to be a very happy time for Tim as the track enters in with a very melodic bell tone and guitar. It is a sound you could expect from a guy who formed One Republic. The lyrics express the determination to write out the story of a perfect relationship. “I’m turning the page; a new one can begin;” a great metaphor. Yet, only four months into the year so far, let’s jump right into summer.

“August: Me and My Friends” now, right here we have the perfect summer song. It’s a shame in real life it’s only February! With a heavy rock piano leading the way, the song is a perfect beach cruising song to remember the fun and true purpose of summertime; to hang out with those you love and let all inhibitions go. With a heavy upbeat orchestra the song brings you in as you “paint the town red” with friends. The relationship seems very secure here as they reassure that they have each other’s love. “August: Me and My Friends” is heavy on the emphasis that your friends can be your family too. A little after the bridge you’re met with a little surprise duet that immerses you further into the happy feeling. Oh! Why can’t it be summer yet?!

Unlike the darkest corners of the internet, we don’t give the spoiler endings to good stories. So if you need to know the end of the story, check out The Year for yourself. Great concept albums are a hard project to accomplish. Sometimes the band may not stay on the story; other concept albums will live in infamy. For Tim Myers, The Year depicts a story unfolding right in front of your eyes. Tim has said he wanted to make the album “cinematic:” and he has accomplished that as The Year is a true auditory-meets-cinematic masterpiece.