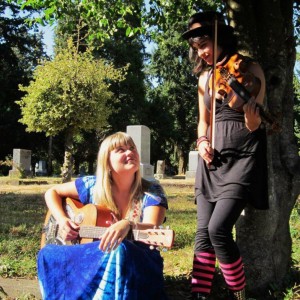 I love when I am surprised by new music.  Especially when it’s from a genre I don’t normally listen to.  Well that happened a few years ago when I first came across the bluegrass/folk band The Gloria Darlings.  Their new CD, Come Home to Me, was released on June 26, funded with a Kickstarter campaign and is 100% independent. The Gloria Darlings, Pandi and Milli, play honest, beautiful music.  The harmonies cut through all of the over dubbed, crazy produced, auto tuned noise that passes as music, and all that matters is the performance.

This music makes you slow down and breathe. You stop and listen to lyrics. You allow a moment to get caught up in the simplicity of the voices, and be awed at the perfect melding of their tones. The title song “Come Home to Me” is so pure that the heartbreak in its yearning for a lost love to return will leave you wanting your own lost love to know ‘there will always be a room for you in the house that is my heart.  Other standouts for me are “Insomniacs Lullaby”, “To Care About You” and “Mermaid Song”.  This is true American music with violin, guitar and upright bass and all but two of the eleven songs written by Pandi and Milli. The only other time I can remember being so touched by an album such as this was the awesome collaboration of Dolly Parton, Linda Ronstadt, and Emmylou Harris on Trio. In both instances it took my breath away.

The Gloria Darlings come out of Seattle, a place I hold dear to my heart. With a new music scene percolating all over that town they pierce through all of it and make themselves heard.  The music can be described as old-timey but with every coffee house, bar, club and festival they play they’re adding more fans to the fold, fans that want to just hear some beautiful music and breathe.

The Gloria Darlings on the web: