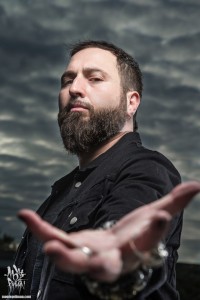 It has been one year since the release of Monte Pittman‘s solo album The Power of Three, and to celebrate the milestone the guitarist, songwriter and vocalist has released three new music videos. Recorded in Copenhagen and produced by the legendary Flemming Rasmussen (Metallica, Blind Guardian, Morbid Angel),  The Power of Three was released by Metal Blade Records to critical acclaim.

A guitar virtuoso, Pittman’s work is found in a surprisingly wide-range of musical places. Some may know the Texas-born guitarist’s work from his days playing with metal band Prong – where he also shared both songwriting credits and guitar duty with Tommy Victor on the albums Scorpio Rising and Power of the Damager. Others may be more familiar with him as guitarist for Madonna – after teaching the superstar to play guitar, he has played on her every live tour since 2001’s Drowned World Tour. And still others may know him from here at Fourculture.  But it really doesn’t matter whether you’re already familiar with Monte Pittman’s talent on guitar: If you’re a music fan who appreciates an artist able to seamlessly blend elements of rock, metal, pop, and thrash across a 10-track album, then The Power of Three is for you.

The first videos is “Delusions of Grandeur.” I love that the focus of the video is on Pittman, bassist Max Whipple, and drummer Scott Fuller performing the song.  By taking this approach, director Vince Edwards highlights the amazing skill of all three. The drumming and bass on this track are amazing and Pittman’s furious riffs and lightening-speed guitar solos are mind blowing.

The second video, “Missing,” was shot live at L.A.’s Whisky A Go Go by Brad Jurjens and Ian Shea. A track with massive sound and a metal sonic structure, this video captures the driving beat, killer break down, furious riffs and spectacular guitar solo. Watching Pittman’s fingers fly up and down his fretboard brings home just how well-earned is his virtuoso reputation.

The third video is the only one that features a solo Pittman. “Away from Here,” shot by Brad Jurjens and AJ Satsangi, has Monte and his guitar standing alone in front of a microphone, changing imagery flashing in the background. This track has a catchy chorus, big chugging riff, uplifting melody, and of course Pittman’s polished vocals.  To my mind it is appropriate that this video has him standing by himself in front of ever changing scenery.  It serves as a visual reminder that Monte Pittman belongs to an elite group of talented musician/singer/songwriters who can combine elements of hard rock, pop, thrash, and metal to create highly engaging, widely appealing, and fundamentally good music.