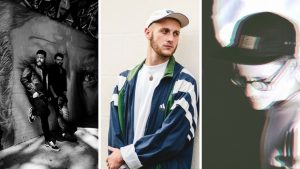 It makes a change for the Three for Thursday to be male-dominated but we’re all for change and contrasts…and that’s how we like our music.  The three songs featured here all have those interesting features to keep you listening.  A lot of music out there is instant and disposable but these are songs that are ‘growers’, perhaps not with that immediate wow factor, but it is the songs with these components that stay with you and make you come back for more.

Bear’s Den – Dew on the Vine

This London duo are fast gaining momentum following their Ivor Novello nominated debut album Islands and a clean sweep of sold out November tour dates in the UK.  If you missed out on this occasion then don’t fret as new dates for March and April 2017 have been announced (tickets on sale today)  and even better news…there’s a new video out…

“Dew on the Vine” has a romantic, ramshackle, almost Springsteen lyricism on top of a commercial, tom-heavy brand of indie that The National are famous for.  It’s pretty safe as a single choice but still delivers and is taken from their Top 10 album Red Earth & Pouring Rain.  Bear’s Den on Facebook

There are only a few days left in October, but George Ogilvie‘s new song is a timely slice of moreish autumnal indie-folk that will make you want it to last that little bit longer.

Drawing you in with acoustic guitar and gentle spiralling synth, it builds with bass and harmonies before strings and drums sweep in to create those delicately beautiful shades of the season.  It’s the voice that captivates most though, filled with earnest drama and sensitivity and a versatility that could be at home with low-key, brooding songs in the vein of Nick Mulvey, or in more magisterial arrangements like early Yeasayer.

“October” will certainly whet the appetite.  George Ogilvie on Facebook

Another gentle, acoustic-heavy number but this is more about the overall atmosphere than a voice.  It’s laid-back and as the song progresses you forget about the soft acoustic beginning as pads and beats take over.  Henry Green‘s voice doesn’t intrude, but softly stays in the mix  providing a warming chill-out vibe.  It stirs the subconscious and lies on the spectrum between Atlas Sound and Bon Iver.

It’s a mature offering from the 21 year old singer/songwriter from South West UK and is taken from his forthcoming EP, Real.  Henry Green on Facebook