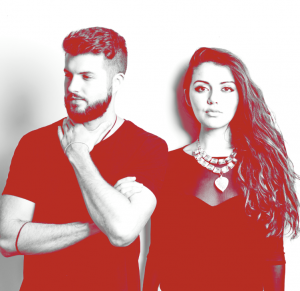 Once A Tree create music that is dark, hypnotic and poetic. A sultry fusion of chillwave, trip-hop and dubstep that soars and glides above basslines humming with menace. They create sounds and moods that bend and warp, becoming tangible as the basslines and melodies flow back and forth over sparse percussion. It is highly personal and vividly expressive.

Husband and wife duo Jayli Wolf (singer) and Hayden John Wolf (producer) currently live in Toronto, the epicentre of twilight electronic R&B like The Weeknd and PartyNextDoor and the urban new wave of Purity Ring. Taking influences from the likes of Toronto rapper Jazz Cartier, Childish Gambino and Chance The Rapper they have found a confidence in their genre-bending sound and showcase this on their latest EP, Thousand Lives.

Openers “Hide” and “Lie To Me” are both bass heavy cuts of minimal hip-hop and R&B influenced chillwave. These set the tone and prepare you for what follows, “Howling’ and “Take Me”.

This is confessional pop in the truest sense. Forged from a past spent confined in the mesh of their respective religious upbringings, “Howling” is the release, the escape, the bolt for freedom. It is visceral and compelling. Jayli’s plaintive calls of ‘let me go’ act as a counterpoint to the snarling and clawing bassline.

“Take Me” is a slow-groove masterpiece. Resembling a Maxinquaye-era Tricky and Com Truise’s self-styled slow motion funk, the track is smothering, enveloping, woozy, hypnotic and trippy; underpinned by a slowly warping and minimal back beat. Jayli’s vocals are sensuous, ice- cool and detached.

“For You” and “Thousand Lives” continue in the same vein, the latter being especially haunting and gothic with huge cathedral-like chords.

Many of the songs hover in or around the borders of consciousness – oozing in and out of your mind before coiling themselves around you and whispering to the deepest, darkest realms of your imagination. It is sensual and seductive. It feels like a performance for you and you alone…your own private show.

This combination of chillwave and hip-hop in Thousand Lives is lush and beautiful. Even though it is underpinned often by buzzing and rumbling dubstep basslines, the contrasts of light and dark elevate the music giving it a euphoric quality often lacking in the darkest, snarliest dubstep.

Thousand Lives is out 10 July.