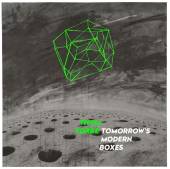 Breaking fabulousness! The new Thom Yorke LP is out NOW. After Yorke and Producer Nigel Godrich posted a picture of an unmarked white vinyl record, the speculation all week has been is it Radiohead or a solo Yorke groove. Well, speculate no more. It hasn’t been since Radiohead released In Rainbows with the new pay model of pay what you want, that we have seen something that is truly new and exciting for the artist and the consumer. Yorke has released Tomorrow’s Modern Boxes through BitTorrent. The hope is to bypass the standard corporate controlled mechanisms where the digital provider takes a fair chunk of the sales generated and also keeps all the information collected from the purchaser. With this model it gives the control back to the artist. Brilliant!! The cost is $6.00 (USD) and the link to download is below. Thom Yorke is amazing, and this newest attempt to poke the corporate bear as it were just makes me adore him even more.

Born and raised in NYC, she began her lifelong love affair with music the moment she first heard T Rex. Throughout her life music has always been there … the steadfast fiend with no judgement, always accepting. It nourishes, it angers, it heals and it makes you feel embraced. It is a part of her just as a limb or a lung. If she can bring any of those feelings to people through her writing, not only does she feel she’s done her job, she feels like she’s given them a gift.