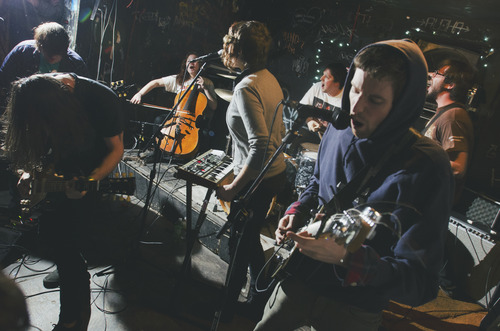 The underground emo punk band, The World Is a Beautiful Place & I Am No Longer Afraid to Die, has released their second studio album from Topshelf Records.  The album titled Whenever, If Ever was recorded at two different studios in the Northeast: Format Audio in Haverhill, MA (by Ryan Stack) and Silver Bullet Studios in Burlington, CT (by Chris Teti).  It took a full six months to record and fans have gotten a chance to partake in the final product of this labor-intensive product.

The band began in Boston in 2006 and have stayed true to their New England roots.  The band consists of Thomas Maxwell Diaz (vocals, guitar, and synthesizer), David Francisco Bello (vocals), Derrick Nathaniel Shanholtzer-Dvorack (guitar and vocals), Joshua Daniel Cyr (bass guitar and synthesizer), Katie Lynne Shanholtzer-Dvorack (synthesizer and vocals), and Steven Karl Buttery (percussion).  This album also features a few guest musicians.  Chris Teti, their engineer at Silver Bullet Studios, plays guitar.  Julia Fields Peters plays the cello.  Patrick William Malone is on trumpet.  There is also a musician only known as Shitty Greg that plays guitar, piano, synthesizers, and even lends vocals.  Though at times rather vocally rough, The World Is Beautiful gives a beauty to the agony and the suburban mundane through spacey guitar riffs and profound percussion work that blend perfectly like the salt in the ocean water.

The sound of Whenever, If Ever is reminiscent of the very recent band Angels and Airwaves, but not nearly the campy sense of adventure.  Rather, I was able to hear sincerity through the profound lyrics and their work with different musicians, as well as through their own creative musicianship.  Much of this is missing in what is known as today’s modern rock, which is more focused on airplay than adhering to that true rock and roll spirit of constant reinvention.  The World Is a Beautiful Place & I Am No Longer Afraid to Die succeeds in following this formula and takes it a step further by recruiting musicians not normally associated with rock music: the trumpet and the cello.  Such reinvention of the never-concrete rock formula will always have a welcome reception for music fans.  Whenever, If Ever rewrites it as beautifully as the band’s name has proclaimed the state of the world.

The World Is a Beautiful Place & I Am No Longer Afraid to Die on the web: