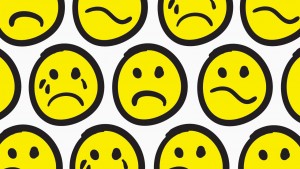 We are a species ruled by emotions, moved into action and riddled by behavior due to our various states of consciousness. Without the engine of emotions, none of us would lift a finger, no less flip someone the bird.

The fierce control our emotions have over us goes so deep it activates basic functions we need to perform, like eating, sleeping and validating parking tickets. We are driven and provoked by feelings, for better or worse, into actions (with the possible exception of using a manual can opener).

Our surrender of composure and pondering comes all too naturally. However, studying human actions, reactions and their sources may bring to light some outrageous answers as to why a hominid moves with feckless speed and how he or she removes the “feck” from speed.

Freud worked with many other doctors beneath him, often stepping on their hands and shins, but not all of his partners in the new science of psychology agreed with him. Many who studied under Freud (even those Sigmund never stepped upon) went to theorize about behavior on their own.

Franz Faust was one of Freud’s first followers and the subject of this sentence’s alliteration. Faust suggested to Freud that all feelings were developed by the time of birth. To expand on his theory, Faust examined many stillborn babies, all which he assumed “felt dead” when born. Freud argued that the dead cannot feel and Faust fired back by arguing that the dead he examined were “still born,” so they must have had feelings. Freud punched Faust in the nose and Faust left to open his own practice.

Eric Furst was the second to leave Freud. Furst planned to be the first to leave Freud but Faust beat him to it. Furst argued with his mentor that all anger was the result of a child being breastfed by his father instead of his mother. Furst told Freud and Faust that the frustration of a milk-less nipple corrupted a baby’s attitude. Calling the theory absurd, Freud and Faust punched Furst n the nose. Faust, who had already left Freud and Furst, returned to accompany Freud in the punching.

Heinz Phillip came to study with Freud on a recommendation by Furst. Phillip was writing a paper for a medical journal when Furst, who was recuperating from a broken nose, told Phillip that Freud was interested in Phillip’s studies. Phillip and Freud got along famously and when Furst left his mentor, Freud helped Phillip finish his paper.

Freud disagreed and the two argued voraciously until Freud tried to punch Phillip in the nose. Phillip ducked when Freud swung and Freud stood ashamed and stunned. Then Freud felt pain as Phillip punched him in the nose. Then, Phillip left his mentor. However, Freud had never been left without completing a punch in the nose of the student leaving him, so he Freud went into a funk.

When Faust and Furst got wind of Freud’s funk from Phillip, Faust and Furst went to visit Freud with clenched fists. Freud was furious with Faust and Furst and a fistfight ensued, resulting in bad feelings between the three for the rest of their lives.

Through the years, research on the origins of emotions that launch good and bad feelings continued and today psychologists are getting closer and closer to understanding why people feel the way they feel and why they feel that way. Not only has this research reached remarkable results, it has also inspired the creation of the Ultimate Fighting Championship.

Written By
Frank Cotolo
More from Frank Cotolo
In general, the older you become, the nearer you get to your...
Read More