So here I sit, 3:58 AM by the clock, listening to the LP Roseland. As I do with so many new bands I come across I listen with my own odd prejudices. This was described as shoegazey and darkwavish so in the spirit of full disclosure my eyes may have rolled just a bit.  That being said I listened with my mind wide open.

Out of the blue during my third listen, I burst into tears. My mind was somewhere in the messed up world of betrayal of friends, lovers, life. This record that seemed so innocuous to me had hit something deep and sliced it wide open. Weird right? The View Electrical puts the smack down on your emotions and wraps it up in a diabolical pretty, lush bow. 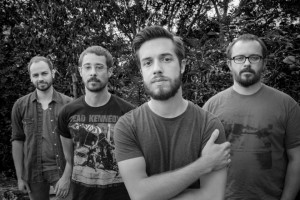 Frédéric Aellen and Raul Bortolotti take this band out of Lausanne, Switzerland and are nudging it onto the world stage. They came together in 2012, and March 20th of this year released Roseland. With this collaboration they have drawn upon every genre that has had a hand in who they are today. That’s some lofty stuff, but overall it works. There is enough here for most people to find something that touches them, but for me this is an album that you just listen to. You let the music take you over and it will connect to the deep down.

Title track “Roseland” starts out a trippy, friendly, pop song that seamlessly slides into industrial thrash complete with Rammstein-esque vocal and then back into friendly land. The structure of the music is mystical and smart with the vocals really standing out. I also dug “Protect Us”, with its French intro, foreboding chant and dark feel. The closer, “We Won’t Stay” is a standout. At 9+ minutes it takes you through the bands influences and as it ends hangs in the air, snapping you back to reality, wondering what the hell just happened.

The album gets stronger as it plays and play you must. This is not something you can just shuffle through and cherry pick songs. Well, I suppose you could, but then you would really miss out on its majesty. Music should move a person. It should in some small way strike a chord, hit a nerve, make you think. The View Electrical does all of that on Roseland.