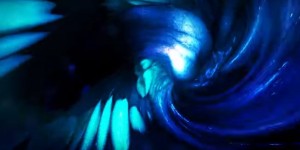 One never knows exactly what to expect from Björk. The Icelandic icon has been walking the meridian between the beautiful and the bizarre for decades now, always breaking new ground in bringing her uniquely surreal aesthetics to life in full dreamlike glory. In fact, if we can consistently count on anything from Björk, it’s that she always surrounds herself with other artists who have a creative scope far away from Earth.

For “Mouth Mantra”, the latest music video off her acclaimed Vulnicura album, Björk drafted the directorial talents of visionary Jesse Kanda, known for his past work with FKA Twigs and recent collaborations with producer Arca. The result is a meditation on vulnerability that takes us inside the singer’s actual mouth, flying between warped and twisting teeth and gums as the mood alters from cave of nightmares to the oddly lovely alien universe we all have within our own bodies. The video was premiered on Dazed this morning, watch it below: