It’s terribly minimizing to refer to Cloud Cult as simply a band. In a recent episode of Twin Cities Public Television’s documentary series “The Lowertown Line”, a fellow Cloud Cult member expands upon frontman Craig Minowa’s vision for the prolific Minnesota orchestral-rock collective: “He never really wanted it just be watching people play instruments. He wanted people to have more of a creative, artistic experience.” Following a journey of evolution that began in 1995, Minowa and Cloud Cult have traversed every dimension of art and refused to be limited by the boundaries of traditional performance. Cloud Cult’s stories resonate on multiple levels of the creative spectrum from music to visual art to film. This has resonated deeply with fans, who have responded to the depth of Minowa’s commitment with endless dedication and love. 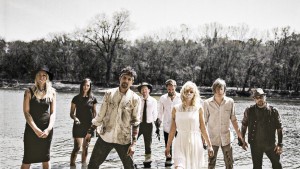 Enter: The Seeker. Due out February 12th, Cloud Cult’s newest narrative experiment is an interwoven story told through both an album and a new art film of the same name. On the band’s PledgeMusic page, fans that pre-order the album are treated to a gradual unveiling of the project, one song and one “chapter” of the film at a time, unfolding a tale of the human quest for meaning in the world and the universe eternal. The scope of this project is in line with its ties to the band’s personal convictions. It was the first album recorded in its entirety at Earthology Records, Craig Minowa’s solar-powered studio located on an organic farm in Wisconsin. These guys aren’t just talking the talk; at Earthology Park, the Cloud Cult crew actually planted over 300 trees to help offset the greenhouse gasses created when they tour. Cloud Cult’s unfailing dedication to the environment not only cements their reputation as a truly “green” band, but also reinforces the reoccurring themes of nature as a central presence in the continuing story they tell.

The Seeker is all about telling a cohesive story that unfolds with a deliberate symmetry. The first track ‘Living In Awe’ starts out with the chorus to the album’s last song (and first single) ‘Through The Ages’ before ascending to an instrumental opening of vast intensity and glorious beauty. These aren’t a few random tracks haphazardly thrown together for unknown effect.

It’s clear from the very beginning that something is unfolding, and the various tracks act like chapters in a book to form the complete narrative. Since the band intends on showing the accompanying film (written by Cloud Cult and directed by Jeff D Johnson) while playing live on their upcoming tour, fans are sure to experience this project on as many sensory levels as possible.

During the first lines of ‘To The Great Unknown’, we are told “You find grace when overtaken by the tempest, you find humor in the cynic and the pessimist, you find faith in the great unknown” Those words definitely reinforce the themes of spirituality that are continuous throughout The Seeker. Spirituality, of course, does not necessarily mean organized religion. Instead, the notion of faith as it is interpreted by Cloud Cult is something more abstract we all stumble blindly through life hoping to attain. It’s clear from the lyrics of this song that everyone is a seeker, grasping at hope and connection on a journey that never goes exactly as planned. Cloud Cult is great at amping up the drama to create an emotional hook, and with its gradually elevating vocal crescendos ‘The Great Unknown’ delivers exactly that.

While many artists tend to gravitate toward sparse minimalism and emotional distance, Cloud Cult instead goes after the entire spectrum of human feeling. Songs like ‘Days to Remember’ evoke a sense of fond nostalgia for our sweetest and most precious moments, while ‘Come Home’ goes for the gut punch of loss. It’s refreshing and unusual in this era of endless background noise to hear music meant to evoke life’s experiences on such a grand scale. When Minowa tells the listener “We came from the Earth and we belong to the sky” on ‘No Hell’, there’s a sense of joy that washes over you, making you feel like a worshiper in a nameless church whose only cathedral is the Earth.

It’s clear that many of these songs are simply meant to be experienced live. On ‘Everything You Thought You Knew’ you can almost hear the audience clapping along. Certain albums are created with a singular focus, like dancing or driving on long road trips, but this project has clearly been envisioned with multiple levels of purpose in mind. So many of these tracks will surely be a completely different experience when heard at a packed venue with the film playing on screen behind the band. An obvious standout is ‘Time Machine Invention’, which is infused with so much forward momentum that you want to stop everything you’re doing and get lost in its energy. Once again, the story about befuddled humans obliviously fumbling their way toward the divine is emphasized: “There’s a reason God is dog backwards: we must chase the tail.”

Instrumental interludes like ‘Chromatica’ and ‘Three Storms Before You Learn to Float’ serve to weave the varying chapters of song together effortlessly, while the darker tone and heavy walls of sound present on ‘The Pilgrimage’ pays tribute to the life journey’s stormier moments. Never during any minute do any of these woven threads of Cloud Cult’s tapestry feel out of place, but instead they serve to strengthen the narrative and make the chain of experience it represents more diverse. The circular path of The Seeker draws to a close by sewing the loose ends together and connecting beginnings and endings. ‘You were Never Alone’ references ‘To The Great Unknown’; The last song ‘Through the Ages’ unveils the chorus that was hinted at in the album’s opening. There’s something epically satisfying in this connectivity. Listening to this record truly makes one believe you’ve been on an eye-opening voyage with Minowa and the rest of Cloud Cult as guides, leaders, and benevolent unseen forces that shape this mystical vision quest as their gift to the world.

Written By
Josh Valley
More from Josh Valley
The undeniable Patrick Wolf may have fallen off the collective radar recently...
Read More