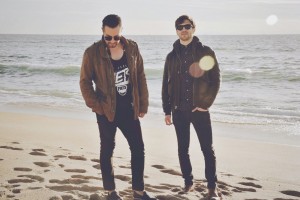 “Oh My Love” is the new single from the LA based indie-pop-rock duo, The Score.  It’s an infectious, upbeat, feel-good track that will have you clapping your hands and tapping your feet from the start. And luckily it has arrived just in time to be added to your Valentine’s Day playlists. But be warned, this is not a conventional, crooning, stars-in-your-eyes type love song.  Indeed, “Oh My Love” is a song more likely to cause an uncontrollable urge to grin, dance, and sing along.

The Score is songwriting producers Eddie Anthony (vocals/guitar) and Edan Dover (keyboard). Originally introduced in 2010 by a mutual friend at Universal Motown, the two planned only to write a pop song together. Instead, despite their very different music backgrounds they formed a successful songwriting partnership that resulted in major label cuts as well as a lasting friendship. Eddie grew up in Los Angeles listening to classic rock, soul and eventually pop punk – teaching himself to play songs by Fall Out Boy and Taking Back Sunday on his guitar. And Edan grew up in New York City learning jazz piano – being drawn into the world of pop production while studying jazz performance at NYU.  Yet the two clicked and, since both were living in New York City, started The Score. They amassed a large following and played around the NYC area, including gigs at the famed Rockwood Music Hall.

Eddie and Edan then set their sights on California and leaving everything behind, moved to Los Angeles. “Oh My Love” was the first song they wrote after arriving in LA.  And if this anthemic, rollicking, gospel-tinged, kick-and-snare-drum-infused, catchy-as-all-hell track is the result of the move, then I really don’t think it matters where the duo came from.  No, it is definitely where they are heading that everyone needs to keep their eye on.