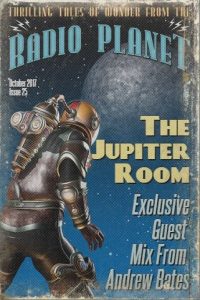 If you’re looking for something a little darker, something with spikier textures and flickering spectral pulses then this month’s guest mix contributor Andrew Bates is your man. Calling on all his experience of experimenting with electronics he has constructed a mix of such industrial magnitude that it is a propulsive ride through the badlands of heavy electronics, searing beats and razor-edged melodies.

Comfortable and adept in both mediums of music and photography, Andrew has an instinct for composition, blurring realities with the sounds he concocts and similarly with the photographs he shoots. Whereas black and white seems to be his preferred mode of photograph, kaleidoscopic and psychedelic seem to be his flavour of music.

Imagine being driven in a car at breakneck speed through narrow serpentine dirt tracks canopied by skeletal trees beneath a flickering monochrome moon and you get a taste of this mix. It is a journey of dark introspection, of leaning into the billowing tides of imagination and disquiet. Perfect for Halloween without being….well, too Halloween.

As an electronic music producer his sound is a mix of minimal 80’s-inspired soundtracks and storm-the-gates outright electronic pugilism. This grandstanding often hides an introspective quality found lurking in the corners of the swirling downtempo compositions that choke with bittersweet melodies. Delicate and confessional, Andrew contrasts simple and often lullaby-like structures with other darker and heavier slabs of throbbing synths and glitch-beats.

“Tirade” seems to meld Cubanate‘s lightspeed industrial break-beats with visceral ATR-like post-punk scream-core. It’s a blast and showcases his ear for production and composition; collapsing and chaotic it never spirals out of control.

Delving into his Soundcloud page really gives one the impression of a keen musical mind sparking with a myriad of ideas that he releases like trapped wolves into the steaming night air; “tuayph“, “mixom bolts” and “I can’t be me” are cut straight from the roiling mass of John Carpenter‘s stark dystopian visions while remaining firmly Andrew Bates‘ compositions; these aren’t pastiches, they are original and singular.

“crispy” is a wonderfully spiraling melodic trip through red-skied pulsating badlands, book-ended by ominous and stark horns and churning beats. It is these pictures that he conjures that invoke his music with such clarity and atmosphere.

As well as producing electronic music Andrew is also an accomplished photographer whose subjects range from captured personal moments of people going about their everyday lives to studies in design and construction especially urbanscapes and brutalist architecture.

Contrasting textures of light and shade using black and white and colour, Andrew is able to inject the mundane with a sense of mystique, capturing a moment that would normally have been lost in the fleeting pulse of the now.  His portraits of people lost in their own private world of stillness and introspection are haunting, posing questions the photographs can only hint at. In contrast his photographs of musical performers, many of whom played Emotion Wave, are brimming with life, movement and shimmer with psychedelic brilliance.

I urge you to visit his music and photography pages and explore.

Ahead of his mix on this month’s show Andrew kindly answered some questions for The Jupiter Room:

Hi Andrew, tell us about yourself
I am a born-southerner-turned-northerner, ambling along trying to be creative.

What is your earliest musical memory?
My parents had taped a copy of a Jean Michel Jarre compilation record they owned, purely for convenience I’m guessing…anyways, this was an oft-played cassette during my childhood. Earliest memory is of being maybe 3 or 4, and walking around the house with no socks on, looking down at my feet while “Oxygene Part I” played, pretending I was some kind of alien prancing about on a different world. Weird lad, of course.

What did you grow up listening to?
Along with the aforementioned Jarre upbringing, my parents assure me they played a lot of Black Sabbath when I was a baby. Moving on to the stuff I can actually remember: Queen, Gloria Estefan, Michael Jackson, and Janet Jackson were staples in the household from the earliest I can remember up until around 9 or 10.

One of the formative things I heard when I was a kid though was when I’d seen Robocop at around age 4. That scene in the nightclub, where Robocop is pursuing Leon. I always loved that track, even at that age. Many years later when I heard “Growler Spit You Out” from VHS Head’s breakthrough Video Club EP, it reminded me of that track from Robocop. Looked it up and it only ended up being a collaboration between Ogre and Al Jourgensen.

Not gonna lie – I’m pretty proud I was into industrial as a kid.

During my early teens I got heavily into Prodigy, and trance stuff that was out at the time. Then moved onto Metallica. Then discovered MTV2, back when MTV2 was awesome in the late 90s…playing Autechre, Squarepusher, and heavy doses of Nine Inch Nails and classic videos from pioneering directors.

You record music and produce mixes as Oscillik, tell us about this.
So I decided I wanted to dabble with making music after I’d discovered Nine Inch Nails, and finally got to messing around with early versions of Propellerheads ReBirth and Reason. I’m both blessed and cursed that Oscillik is a pretty unique name, so much so that I’m seriously considering retiring that pseudonym and just using my real name for any future musical output.

My musical output has been on hiatus for quite a few years, a combination of self-conscious stuff and lack of motivation (a 3 year period of unemployment would have been fruitious, however Team Fortress 2 took care of that). That’s something that I’m taking strides to resolve though so fingers crossed there’ll be some fresh material being played live somewhere in the near future. As for the mixes, they started out as a radio show I was doing, volunteering for Halton Community Radio a few years ago. Of course there was no-one playing anything like what I’m into in the area local to where I live, and I had the idea to play some tracks and give some background and insights into the musicians and tracks. If anyone was actually listening, I hope they enjoyed that 8 minute SND track I played! I’ve continued to put out the odd mix here and there when I’ve had that itch, sans my talky bits.

It’s difficult to pin down my sound, so I’m gonna be lazy and say it’s Electronic.

You’re an accomplished photographer, does this enable you to express yourself with more freedom? If you had to choose between music or photography, which would you choose?
Thanks for saying so, Mike! Photography is something that I’ve always had kind of an interest in, but hadn’t really pushed myself until maybe 7 or 8 years ago, as mobile phone cameras started getting better. After I started getting more and more compliments on my snaps with my phone, I thought that I’d finally found something creative that I feel confident enough to pursue a bit more and I got myself a proper camera.

It’s such a satisfying feeling being able to nail a shot, in much the same way it is satisfying to program the perfect breakbeat, or synth line. I do find photography very liberating creatively, and I’m mostly concentrating on those clichéd urban style shots and dabbling in street photography. I’m really pleased with the body of work that I’ve built up so far, and it is purely something I’m doing for my own amusement. It’s just very rewarding to hear that sometimes, just sometimes, other people think my work looks decent too.

If I had to choose in which medium I continue my creativity, I have to be honest – I’d choose photography. I feel more comfortable and competent with it, and I find myself less frustrated with

things in that kind of world. But please don’t make me choose!

Which informs your creativity more; music, film, art, literature or something else?
I can say with certainty that movies have influenced me the most throughout my life, as far as creative output is concerned. The biggest influences on me are directors like David Lynch, Shinya Tsukamoto, Stanley Kubrick, Wes Anderson, Richard Ayoade, Nicolas Winding Refn…as well as Directors of Photography (whom are equally just as important) Darius Khondji, Jordan Cronenweth and his son Jeff, Peter Deming, Ellen Kuras. I tend to gravitate towards looks that are extremely stylised, moody and atmospheric.

Tell us about the mix you’ve done for The Jupiter Room.
I’d been wanting to play about with putting some samples from a favourite show of mine into a moody and heavy mix, and this was the perfect opportunity. Managed to tie it in with the opening and closing tracks too, if you pay attention to the sound palates used! As usual, I tend to go a little bit heavy with my mixes. It’s the nature of the beast I suppose. This mix is no exception.

What are you listening to at the moment/who should we be checking out?
I got hold of Ben Frost’s latest album which is great – I’ve been following his work ever since I heard his album By The Throat. I also managed to snag myself one of the cassettes for Nmesh’s Pharma. The soundtrack for the indie game Ruiner is fantastic too, albeit incomplete (licensing issues). Other than that, I have been eagerly awaiting something from God On My Right, and anyone who digs my mix should check them out.

What’s your favourite sound?
That last cymbal and bass kick hit in the Amen Break. Actually no, it’s more the groove that I like on that. The growl bass thing that kinda sounds like a frog from Michael Jackson’s “Thriller”. The orchestral stabs from Planet Rock. A TB-303 when it slides between two notes. The wall of noise that hits you in waves when you go see My Bloody Valentine live. Breakbeats where you can hear the edits. The sound of a Pringles can when it’s partially filled with water, and you tilt it as you tap on the metal bottom. The sound of typing on an IBM Model M keyboard. When the Power Loader from the film Aliens is operated. I know that’s more than one sound, but come on…

If you could make music history, how would you do it?
I’d love to be big enough to gain a literal cult following. Like Boards of Canada. And lead the listeners on, just like they do. And then actually put some back masked stuff in a 2xLP release that requires you to play all 4 sides backwards simultaneously during a red moon when Jupiter and Saturn meet. And it would say “It’s just music, maaaaan.”

What are you currently reading?
I’m currently reading The Secret History Of Twin Peaks by Mark Frost, manchester MODERN by Richard Brook, and Neuromancer by William Gibson. Other than that, I tend to read user manuals or technical manuals for stuff so I’m also reading through the manual for my new audio interface.

What are you up to at the moment?
Currently working in hell (call centre) while trying to fit massively unsociable hours around my social life, which almost exclusively revolves around music. The nights I end up going to in Liverpool have been so very important to me, as it’s the only chance I get to meet up with the great people I already know, as well as newcomers. Emotion Wave has been terrific in building up a community of creative minds.

Written By
Mike Stanton
More from Mike Stanton
A master technician when it comes to producing, Clas Tuuth has given...
Read More