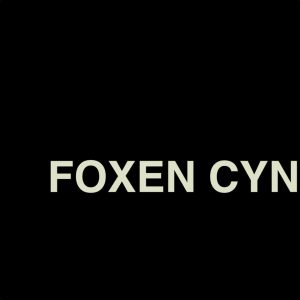 Sean Fearon is Foxen Cyn, formerly one half of experimental electronic duo Queen Maud and now forging a solo path of dark avant-pop. Describing Sean‘s music is a difficult task given the genre-twisting elements his compositions contain; they subvert known styles and tropes, pushing the listener in unexpected directions. As a live performer Foxen Cyn is part performance artist, often wearing striking, sometimes luminous makeup and performing in front of wailing equipment. An irreverent sense of humour plays a large part of his music which lends a gloriously surreal edge to his compositions, adding yet further layers for the listener to enjoy.

Not only is Sean a musician and composer but he is a producer of note and a skilled sound mixer, skills he employs at local live venues ensuring other bands sound at their best. Sean balances his time as Foxen Cyn with also being one of the driving forces behind regular underground electronic night Emotion Wave, showcasing three electronic producers in the North West region every three months.

His EP Demonstration is a wonderful example of his art-pop. While undoubtedly sounding synthetic, Sean‘s voice lends an organic, human sound to  the otherworldly keyboards and thrumming beats. So much of what Foxen Cyn does is hidden, buried in the background or lurking between the lines, it is only after repeated listens that his full coda is revealed and the pieces become distinct. Often unsettling, the music has a groove all of its own, each track an elegy to a fractured, disconnected and introverted state of being.

“High Pressure” and “Song For Woody/Dylan/Bowie” are haunting new wave lullabies. Sean‘s voice is almost a sigh throughout “High Pressure”, the quiet melody develops into towering melancholic drones punctuated by nervous electronic pulses. “Song For Woody/Dylan/Bowie” is eerie; a sonorous bass hums with slowly coiling menace, plunging into abstract electronics and meditations, capturing Foxen Cyn‘s alien electronics perfectly. Because the song doesn’t finish cleanly, but seemingly collapses in on itself, only adds to the nebulous cloak of electronics.

“Abyss Watchers” flirts with IDM wrapped up in a paean to the lonely and disconnected. Sean‘s voice is strained with emotion, almost falling into desperate yelps, pitching it between Scott Walker and Andy McClusky, “Here it comes, another tear on the dance floor / And here it comes another night on my own.”

“Blank” is chamber pop re-imagined through thickening, coalescing synth melodies, that roll and unfurl with each passage, Sean‘s voice at times a whisper, a melancholic shout or a soothing vocoder. “Blank’s” driving element is the arpeggiator, underpinning the movement and structure, constantly driving the song upwards in never-ending spirals. There are touches of Black Moth Super Rainbow in the way he has used the vocoder, utilising it as another layer of instrumentation and revealing the shimmering textures throughout.

“Grow” closes out the EP and is a complex and layered song that skitters with electronic elements. The components that go to make up a Foxen Cyn song are there; dark and unsettling synth drones meld with brighter almost playful keyboards drawing the listener into his murky world of fused electronics.

Throughout the Demonstraion EP, Sean‘s producing talents abound, managing to draw what could be foggy layers of drones and pulses into self-contained and accessible pop songs. His very distinct brand of sweetly wounded soul for the post-Casio generation is cool and compelling. Foxen Cyn‘s compositions are mournful, gothic, baroque pop ballads that lead the beautiful way.

Sean very kindly answered a few questions for us:

What is your earliest musical memory?

I used to have these reoccurring dreams that I was stuck in a maze made out of wooden slatted fences and there was a big UFO in the centre of this maze. I’d be trying to get to it while being spurred on by this big, God-like, deep booming voice. It’s not necessarily musical, but I think it’s the reason behind my obsession with vocal manipulation.

What did you grow up listening to?

The first cassette I got was Teletubbies “Say Eh-Oh!“. My dad would usually play Paul Simon, The Beautiful South and the Wendy Carlos Clockwork Orange soundtrack, while my mum would play contemporary stuff, the main one I remember being The Miseducation of Lauryn Hill.

Where do you draw your inspiration from, musically and non-musically?

What is the ethos behind your sound as Foxen Cyn? What’s the story behind the name?

I think the ethos behind the last release was trying to be as polished and poppy as possible, now it’s about trying to get the broad range of my taste and the extremes of my personality out via music. I consume a broad range of media in massive amounts, and Foxen Cyn is essentially me sicking them up with a little bit of myself in there.

Tell us about your studio setup. Do you use hardware, soft synths, DAW or a combination? How does this differ to your live rig?

I only use hardware – I’m too thick to use any sort of software, really. I’ve got a big collection of stuff I’ve amassed over the years from weird guitar-bass hybrids to analog and digital synths to theremins to kids percussion to tape loops. I record all these through an Allan and Heath desk and mix them in Reaper, which I essentially use as an 8 track. When playing live I try to condense this down as much as possible.

Do you compose quickly or do you spend hours tweaking and finessing your tunes?

I tend to write the song entirely in my head before I sit down at a piano or sequencer and write it out, which means I’ll have done nothing for months and then throw out 6 tracks in a day. The problem is I’m incredibly lazy to the actual transition from bonce to sequencer can be put back for ages.

Tell us about the mix you’ve done for The Jupiter Room.

There’s a lot of stuff in there and it isn’t for everyone, but I’d say try to listen intently with headphones and you might see what I’m getting out of it.

What’s next for Foxen Cyn?

Recording a new release and not playing live 🙁

Find Foxen Cyn on the web:

This show was broadcast on Thursday 29th November 2018 on Fourculture Radio.