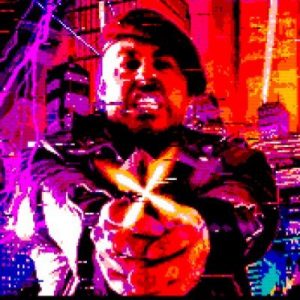 Having emerged from the post-punk scene in Liverpool some 20 years ago his journey has taken him from the harsh glare and rage of guitar-oriented noise to weaving dark, pulsing spectral soundtracks that often mirror the dark times we find ourselves in. Nostalgia plays a big part in his compositions taking inspiration from the horror films of the 70’s and 80’s to create new 21st century soundtracks. His music takes you back to video store rentals, flickering and warping VHS tapes and the golden age of b-movie horror from the likes of Argento and Romero.

Appearing in several independent horror flicks as well as having scored a few, he understands the concept of space, atmosphere and narrative flow, something which lends his music a multi-layered quality. His compositions are densely constructed, existing as entities in their own right rather than fitting in with a particular genre or trend. Each tune tells a story and has a linear flow that takes the listener on a journey creating imaginary movies in one’s head, sound-tracking the mind’s dalliances with imagery and mood.

Check out this live performance of the track Escape from L8 (a play on the mid-eighties movie title Escape From L.A. – L8 is a district of Liverpool). It’s a charging, propulsive piece of atmospheric, filmic electronic terror and demonstrates his track building/looping to good effect.

Live, his shows are chaotic, layered and often humorous. This all adds to his charm as he chats freely with the audience and sips his beverage of choice (red wine) creating soundscapes that hold those listening transfixed. Making use of looping technology, he builds tracks before the very eyes (and ears) of the audience and it is his ability to construct these atmospheres, to create journeys and tell stories that is his great strength, ensuring a JeanMichelNoir gig is not to be missed.

Liam has put together a mix for this month’s Jupiter Room (due for broadcast Thursday 18th May 5PM EST 10PM BST on Fourculture Radio) and we are very excited by what he has come up with. We asked Liam a few questions about where he came from, where he is now and where he’s going.

JeanMichelNoir: This mix is kind of like a brief history of the bands who have blended instruments together to achieve what they need. I like punk attitude hence Alan Vega. I like the idea that any schema can exist if you just invent it. I’m influenced by every genre from every decade but I truly respect the bravery of honesty and originality. I feel that the songs I have chosen reflect this. I have purposefully left out the harder side of my musical tastes as they wouldn’t mix too well but this mix represents me well.

TJR: Tell me about JeanMichelNoir. Where did it come from? Did the music you grew up around help shape your sound?

JMN: JeanMichelNoir came about when I first started taking music seriously outside of a band. One/two band practices a week were just not enough to satisfy my urge to play and create. I got hold of a four track tape recorder and started making songs. This must have been about 2001. I quickly tired of recording psych and country songs with just a guitar and voice so I started playing around with anything I could grab to try to make my music more like a band or at least to have something like a drum kit behind the melody.

My first foray into arrangement was using this four track. I used MTV Music Generator on the PlayStation 2 to arrange strings, drums and synths. Next I would record this through optical into my stereo onto cassette, this left two tracks on the other side on which to record the guitar and vocal. This made me sound like I had an orchestra behind me and I loved it. This led on to Midi/DAW and peripherals from Pentium Two with Cubase VST right up to my set up today, which is Ableton, PC, iPad, Launchpad, SPDSx, EIE, Fender Jazzmaster.

TJR: Where do you draw your inspiration from, both musical and non-musical?

JMN: My inspiration was, and is, to create a sense of nostalgia without being too funny or too retro. I have been a politically vocal person for a long time and being in punk bands, which I was and am, can be very limiting when credibility is a primary concern. There’s not much room for humour when you are trying to make a point about how angry you are about a specific policy. I needed an escape and this was it. I’m obsessed with video games and horror movies. I’ve been watching John Carpenter my whole life and was always fascinated by how to scare people sonically. I love nerd culture and I wanted to do something that reflects this. This might seem quite normal or traditional now but in 2004/5 I thought it was a fresh approach. I covered computer game soundtracks making them distorted and fast or made music inspired by Philip K Dick or science or something bigger than my own specific opinion. I always try to keep it primarily instrumental. I feel that this is the most non-political choice.

TJR: You’ve worked on independent horror movies as both an actor and soundtrack writer. How does writing a soundtrack differ from writing tracks for your album releases?

JMN: When I’m scoring a film I seem to have a genuinely infinite supply of creativity. This is in complete juxtaposition to writing songs. Crafting a song, I believe, is really hard. I will take a lot longer on very tiny details on songs (even though I’m a rubbish producer) as opposed to score which, for me, is much more like improvisation.  There are themes and clips that repeat but it comes from playing along to actions fluidly. It’s easier but not more fun. They’re both very satisfying. I love acting knowing I’ll get to score myself too. I would definitely never give my on-screen character the scariest music. That would be terribly unprofessional.

JMN: My favourite horror scores are probably fairly obvious. I love John Carpenter, Goblin, Frizzi. Halloween 3 and Christine started it for me though. The pulsating synths with reverbed screeches that drive the unearthly late night feeling of both of these films left me with a zest for everything American, sleazy and creepy. Suspiria is a classic score and I think that has influenced my live act most. That and Tubular Bells. I like to think I’m channeling the late seventies/early eighties through my modern gear.

TJR: You also compose under the name Z.E.B.R.A., how does this differ from your JMN stuff?

JMN: The reason I have another pseudonym in Z.E.B.R.A. is that I needed a solo act in which I could say political things. A band with just myself in it. It made sense to differentiate JMN and Z.E.B.R.A. because I wanted to sing about serious things using the looping and the synths so it’s another way of me having my cake and eating it. I don’t rely on nostalgia for any part of Z.E.B.R.A.

JMN: My music is fun, scary and loud.

TJR: What’s next for JMN? Where can you see you sound developing? Is there an album on the horizon?

JMN: I am working on a record. It’s all my own stuff and has big orchestral psych as well as my usual synths and guitars. I’m about half way done. My live act will probably always incorporate the big covers that I do because I love doing Suspiria and Tubular Bells. I am, however considering how to develop my stage act. I’d like some theatrics and something a bit more professional. That would require not getting drunk though. I’m convinced some people come to see me play to see how I cope with the looper whilst drunk on red wine!

JMN: My favourite sound is the sound of my little girl laughing! She’s a right scamp.

TJR: If you could make music history, how would you do it?

JMN: If I could make musical history it would be through creation of a song that undeniably explains and manages to communicate the evils of neoliberalism, selfishness and deregulation causing all right wingers to reconsider their selfisms, which in turn would provide a socialist utopia. No biggy?

Many thanks to Liam for providing the guest mix and answering our questions. Explore his music and enjoy this playlist we compiled.

Written By
Mike Stanton
More from Mike Stanton
Alison Moyet has a new album out and it is a beautifully...
Read More