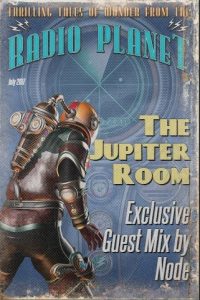 It’s well and truly summer and as the next few weeks stretch out before us like the expansive green field of our youth it’s time for another show and a brand new guest mix. This month The Jupiter Room is made-up to welcome Thomas Nod aka Node into the fold and he has put together an extraordinary mix that should be the soundtrack to those beat-kissed nights of July and beyond.

Thomas is a professional DJ and we are very excited with what he has conjured up. We think you will love it. Thomas has been a longtime host of his podcasts The 140 Show playing mainly dubstep and The Charles Report featuring a heady mix of breaks, downtempo, techno, IDM, ambient electronica and much more. Node has the innate ability to create a mood, to whisk you on a journey through the use of interstitial samples and a collage of musical vignettes. It is this sound tapestry that elevates his mixes beyond mere playlists, they become soundscapes stretching out to the shimmering heat haze of the sonic horizon.

Before we dive headlong into the crystal waters of his stunning mix we asked Node a few questions about music, the Japanese scene and what we should all be listening to:

The Jupiter Room: So, who is Node?

Node: I’m a DJ and fan of all sorts of music although my main bread and butter is of the electronic variety. I first picked up my first pair of decks 20 years ago! Been playing ever since. Spent ten years in Manchester playing for various nights and clubs and ran an internet radio show and then a podcast from about 2005 – 2014. Now relocated to Shikoku, Japan where I want to continue playing out in Japan and knuckle down to making some music too. The name came about when trying to think of something that summed up what I played and as that’s often been as many genres as possible I like the idea of Node as it interconnects between different things and that seemed to suit what I was about rather well. As I say, I’ve been making music as a hobby and now have a new upcoming project called The Drumlake Institute I’m hoping to get out there some time in the next year, once things have settled down here in Japan. It’ll be a way to release some music and remixes and also to put out mixes, maybe a podcast and what I’m looking into is broadcasting music and video together which might be fun. I like a lot of soundtrack music and I think having that against a backdrop of video images could be entertaining. I have an example of that sort of thing up on the Drumlake Facebook Page. 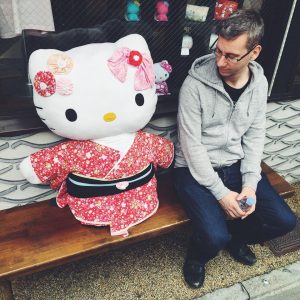 TJR: What drew you to Japan? What’s the electronic scene like out there?

Node: Well, I’ve always been interested in Japan and it’s culture and history. I’d been considering coming out for a while, I’d met some good people from here through music in fact and got to know the scene in Tokyo a little and was lucky enough to play there. It’s a very small but friendly scene I found. Mainly in Tokyo but also in Osaka and Kyoto and to a lesser extent in other smaller cities. What I really liked is that because it’s small there is a tolerance between genres that I don’t find in the UK.  There’s a lot of dismissiveness about other genres that always perplexes me because music is such a subjective thing. The positivity I found in Japan’s really encouraging to see.

TJR: What is your earliest musical memory?

Node: Beethoven`s fifth is my earliest, just remember having a tape of it from my dad and playing it over and over. Loved the dramatic feel of it. Then for electronic stuff I heard a record by Sky (again, something my Dad owned) and really liked the spacey synthesisers.

TJR: Tell us about the mix you’ve done for The Jupiter Room.

Node: I thought I’d start with some dreamy ambient stuff and quickly smash through some proper Electro, Acid, Techno, IDM/Braindance and drift out again with some ambience. There’s old and new releases in there and I wanted to include a lot of styles but hopefully giving the tunes I chose room to have the desired effect. There’s a good few melodic bits in there and I’m always a fan of lots of bass so there’s a fair back of that too.

TJR: What has helped shape/influence your musical taste/style/output (be it film, TV, music or other)?

Node: Definitely films influence what I like, I often opt for quite soundtracky stuff and usually with a Sci-Fi tip. Plus growing up in the 80s and the all-pervasiveness that decade seems to have had for the last 15 years, I can’t help but have been massively influenced by that, all the music and technology from that decade still hugely resonates today in what I hear, both good and bad so it definitely has a big impact. Also I grew up on the IDM stuff like Boards of Canada, Autechre and Aphex Twin back in the 90s as well and it’s ace that stuff is still around in one way or another. David Lynch is also another big influence and he really gave me a taste for not just sound design but also that sort of blues and jazz he uses in his films, included in that is obviously also Angelo Badalamenti and the dream pop/voice of Julee Cruise. Not included in this mix as it didn’t really fit is the kind of late 90s dark drum and bass which I still really love but I think some of the atmospherics from that genre can still be found in a lot of the drone and dark ambient things I hear. I like some DnB now and it’s also good to see there’s some sweet Jungle being made too.

TJR: What are you listening to at the moment/who should we be looking out for?

Node: I found some interesting stuff recently from a label called Misc.works that has some decent, original material and an interesting concept.

Analogical Force have put out some top stuff this year and is where two of the tracks from the mix come from.

CPU get my vote as one of the best electro labels putting out stuff that’s consistently excellent too who I dare say your listeners are familiar with.

Another track from the mix is by DivisionByZero who’s just put out an album that’s really accessible and a top listen.

And someone to look out for I’d say was hems who’s making some awesome stuff and you can find on Soundcloud while it’s still up. You can catch him playing this Friday (July 21st 2017) down in that London actually Astral Industries with Residents

Finally, not something I was able to include in the mix but has some top stuff to check is the French label Otium, very atmospheric music.

Node: Probably something with too much delay added to it.

TJR: If you could make music history, how would you do it?

Thanks for your time Thomas and for the awesome mix you’ve contributed to this month’s show.

Node on the web:

Written By
Mike Stanton
More from Mike Stanton
TV ME, piloted by Thomas McConnell, have been around for a few...
Read More