Bemp, a three-piece from Liverpool are a band that don’t take themselves too seriously, something that is sadly lacking in much of today’s music. However don’t let that happy-go-lucky, joie de vivre fool you, they are deadly serious about the music they produce, often honing their creations with a meticulousness that belies their apparent laid-back approach to music. Anthony Burke is the main songwriter and plays acoustic guitar, Dave Akery is in charge of bass and vocals and Steve Parratt curates keyboards and guitar.

Known on the circuit for producing genre-bending tunes of wit and experimentalism, their live shows are something to behold. Currently working on their debut album, they have been taking inspiration from acts as disparate as Com Truise, The Beta Band, Prince, Nick Drake and Aphex Twin, artists whose music perfectly fits Bemp‘s musical ethos. Recently they teased the first track, “Perambo”, from their debut longplayer and it’s a slice of spacey weirdness with organic guitars foaming rhythms and Radiophonic synths. An instrumental piece, “Permabo” is Bemp soundscaping their psychedelic asses off. Layers of cobweb-like ambience are punctuated by stabbed synth bass and tugging beats to lend an increasing heady swirl. 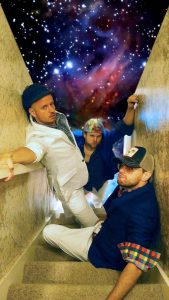 I don’t know a huge amount about the lads as they appear to be slightly media shy, preferring to allow their music to speak for itself. Firmly embedded in the Liverpool music scene they have collaborated with and remixed several local acts, each time imbuing the music produced with their own unique sound. It is this ability to switch styles with apparent ease that gives Bemp their versatility and genre-defying status. What we are sure about is that the basis of their music is electronic with sprinkles of math rock, pop, ambient and acoustic folk.

Having previously played in different bands the lads had been making tunes in their bedrooms for several years evolving their sound from more traditional rock to the experimental electronica they currently produce. They all attended the same school and after discovering a connection through music started writing and performing together.

If ever there was a track that encapsulated the fun and free-flowing sound of Bemp it is “Jontypops”, something born out of playing around with sounds and ideas and a tune of summery vibes evolved. Balearic and housey, “Jontypops” pings along with a sway and twang in much the same way as Lemon Jelly have been producing. Expertly mixing a blend of lounge pop and subtle house beats, Bemp tap into that summery vibe and pull you along, laughing and skipping into their neon-splashed world.

Contrast this with their  pop song “Tuesday” that manages to cram in so many influences and styles that it’s almost like playing music genre bingo. Vocals that sound straight out of John Foxx, delivered in a laid-back and easy-going croon over sequencers and dense and textured guitars. This is all held together by a steady beat that pings through arcs of synths.

“Sandpit” starts off all float folk and psychedelic but finishes up as warping dubstep with irreverent vocals layered over the top; this unexpected change is typical of Bemp‘s desire to continually surprise by warping traditional song structures and subverting established musical genres and tropes. Of course, this makes them an incredibly exciting act to witness live; watching them change-up through the gears is a heady and exhilarating experience. “Sandpit” kind of captures that energy and movement. There are some serious skills on view here and it is easy to become dazzled by the musical chops on display.

Try to catagorise Bemp, I dare you, it can’t be done; everything they produce is the distillation of their range and scope and shows why they are able to adapt and change, to grow and expand. This is why Bemp are one of the more exciting bands on the circuit and precisely why you should all be buying their album when it emerges, blinking in the moonlight.

The Jupiter Room fired off some questions to the lads and they replied in typically amusing and surreal fashion. We would have expected no less.

When is your favourite time of the day or night to write/record?
The best time to write and record is around ten o’clock in the afternoon.

Do you compose quickly or do you spend hours tweaking and finessing your tunes?
We usually take ages to make a tune, decide it needs completely changing then take further ages.  We’re working on this problem by setting deadlines and then feeling bad when we miss them.

What’s next for Bemp? When are you playing live next? Any new releases in the works?
Next up for Bemp is releasing an album in the near future and playing at our friend’s wedding in Budapest.

This show was broadcast on Thursday 30th August 2018 on Fourculture Radio.