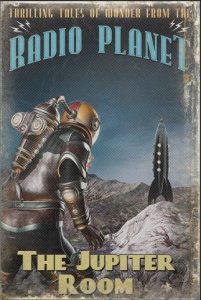 Like many of you, I’m sure, I’m ready to show 2016 the door. It has been something of an outlier, what with all the high-profile departures and some insane political results in both the UK and US, however, I am going to attempt a quick musical round-up without losing my composure entirely.

Ahead of the next Jupiter Room Show on Thursday 29th December (5pm EST, 10pm GMT).

Firstly my top albums of 2016. They’re all electronic, obviously. Phono Ghosts‘ Solar Dream Reel stands out; it’s an amazing album that offers more with each listen. It reminds me of VHS Head with that style of cut-and-paste sampling, glitchy production and layers and layers of textures. Neil Scriven (Phono Ghosts) has an ear for melody which smooths out the often chaotic construction of the tracks delivering a fresh and enjoyable listen. Think of it as an Escher painting, you notice something new with each visit.

The Pattern Forms‘ Peel Away The Ivy is also a thing of exquisite beauty. To say this album is pastoral elegance would be understating the fact enormously.  Lost Idol released his first album in six years to great acclaim. Chilled out beats and introspective haunted atmospheres abound on Chrome Machine Dreams. 1991‘s No More Dreams is a dense and textured album of moving shapes and colours, mellow and dark it climbs inside your psyche and haunts your dreams. I’ve been a fan of Xeno & Oaklander for a few years now and love their brand of synthpop. Their latest album Topiary deals in breezy meditations and hard-edged synth pop with diaphanous interludes.

I have featured a track from each of my top albums (except for Lost Idol. I have chosen a track from his December released EP White Light, which is stunning) in the latest Jupiter Room show for your joy and delectation.

The Pattern Forms – Peel Away The Ivy

Burma Camp, the side project of post-rock new wave-ists The KVB, is something dark, murky and expansive. Instantly recalling the likes of The Haxan Cloak, The Soft Moon and Demdike Stare, they produce bleak and brooding electronic drones.

“Imposter” is all rattling percussion and dragging tempos shrouded in dark swirls of ambient techno, underpinned by kinetic rhythms and dead-of-night eeriness.

Burma Camp have created a nebulous instrumental where atmosphere and percussion dominate. The sound design is ambitious, utilising slow-pulsing beats and creating textures somewhere between reverb-soaked keys and metallic drone. This all combines to evoke a tangible atmosphere of impending doom.

Salt Rush is a collaboration between Mark Peters bassist/guitarist/keyboardist in electronic shoegaze band Engineers, composer/producer and Engineers drummer Matthew Linley and Maud Waret who provides vocals. Judging by the pedigree of those involved, this project delivers exactly what you would expect and hope.

“Cascades” is a dreamy, hazy and shimmery song. Waret’s vocals are gossamer-infused, floating on an ethereal plain of washed guitars and warm synths. The melodies glitter as if captured in flecks of light cascading in a waterfall.

Right from the off the track drifts gently into a diaphanous realm of the pastoral ambience reminiscent of Ulrich Schnauss‘ synth-gaze releases. Expansive soundscapes and breathy keyboards are underpinned by reverb-soaked guitar creating a meditative cosmic lull. It is achingly beautiful and deeply immersive. The full sheen of Waret’s vocals swirl slowly, spinning in and out of the ambient realm created by Peters’ and Linley’s astral production.

Retro-wave, synthwave or just plain synth-nostalgics, Soccer96 definitely exist in that 80s revival factory that has been sweeping the globe like a planetary sunset. Dan Leavers (Danalogue) and Max Hallett (Betamax) normally curate synths and drums respectively at London-based jazz, electronica, funk and psychedelic rock outfit The Comet Is Coming. Here on “Megadrive Lamborghini” they have given free-reign to their innermost 80s fanboy by combining anthemic synth-scapes, gossamer-fused production and bouncy groove-shaped beats that create warm and fuzzed drama. Melody is key and it melds with dream-like vocals and a smooth soulful vibe.

“Megadrive Lamborghini” is instantly catchy and a sure-fire summer soundtrack, all it requires is a slow-glow sunset and amber clouds.

Introflirt featured on The Jupiter Room a few times and always supported the show. I knew Ben Runnels (Ben Benjamin) the lead singer who with keyboardist Nicole Renae (Denalda/Vafa) created 1980’s inspired, dark, neon-lit new wave. Their songs were full of noir-specked melodies and Ben’s shadowy croon to create what they dubbed croon-wave.

Both Ben and Nicole were lost in the Ghost Ship Oakland California fire that claimed 36 lives at the beginning of December.

Ben was known in the Oakland area for playing in jazz bars interpreting old classics with his distinctive voice and easy charm. This translated to his band Introflirt by combining Denalda’s ice-cool new wave synths with Ben’s 1940’s style delivery.

I found Ben to be a kind and gentle soul who encouraged other musicians and performers. Friends fondly spoke of Ben’s love for film noir, old jazz, vintage clothing and coffee, and remembered that underneath it all was a kind-hearted and quick-witted soul.

Here they are doing what they loved.

Thanks for listening/reading throughout 2016. Have an amazing New Year and I’ll see you in 2017.

Written By
Mike Stanton
More from Mike Stanton
With a new album of flickering screens, humming oscillators and songs from...
Read More