Another big thank you goes out the the social media of the world as it introduced me to Color Theory and namely Brian Hazard.

In my travels around the interweb searching out new musicians and bands I was delighted to stumble my way upon what I would have to call one of the most organised and focused musicians I have found on the web. Not only can you keep up to date with Brian’s work and releases but he has organised his web presence in a way that puts others to shame. Free downloads, Regular Information Posts, Mailing lists, Competitions and real communication with fans and followers using all the social media assets out there, and with over 34,000 genuine twitter followers it’s working well. 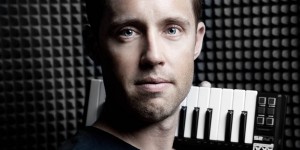 Hard working and prolific are terms that easily spring to mind when thinking of his on line work and dedication to his fans and followers is second to none. But what about the music? Well, posted on this page you’ll find a couple of videos and a message from Brian too (told you he was hard working) to make your own mind up, but for me I am impressed most by his claim on a genre of music that was in need of new talent and a fresh input. If you enjoyed the likes of Depeche Mode, Yazoo & Erasure to mention a few from the 80’s days of Synth-Pop then you’ll be delighted to find fresh new material from Color Theory which in my opinion not just parallels the style but often shows how it should have been done.

Take for example “Song Named After A Girl” which was the first track I heard and made me want to hear and know more. It sounds like a very simple production of an easy simple song, and it’s the ability to keep it clean and simple that is the art of Color Theory as it’s so easy to get it totally wrong and blow out what could have been a good song. It’s a perfect example of writting a song and letting the song speak for itself, and for me this is what Color Theory does brilliantly, and that’s not easy to achieve.Lessons should be learnt from aspiring musicians that just because you can over produce a song and fill it with a wall of sound doesn’t mean you have to. If your songs are good and solid then, like Color Theory, let the music do the talking.

But then take a track like “Two,” which has to be one of my favourites.  Again it’s kept simple and not over written but builds brilliantly throughout the song and drops back exactly where it needs it. Whether this is planned with weeks and months spent fine tuning each part, or whether it’s spontanious and “just happens” in the writting of the song, only Brian knows, but he’s nailed the style and claimed it as his own. However, in saying that you will find a “United Forces In-Trance Mix” of “Two” which would easily find a home in any Euro Trance Club and have the crowd jumping on their feet.

So it’s not all simple mellow tracks, Color Theory will get you on the dance floor as good as anyone can, with driving 80’s influenced style dance beats and synth riffs (not to mention the techno re-mixes) tracks like “What You Said”, “Indestructible” and especially “It Must Be Halloween (Lars Hausmann Remix)” have driving thumping beats that will blow the bass out of your speakers when turned to 11. With nearly 9 albums (number 9 coming in 2013) to choose from you, like me, might just be delighted to find a style of music thriving and growing in the hands of Color Theory – and safe hands too! For more on Color Theory and to find out how to purchase tracks, albums or to join mailing lists and find our more, then head over to the Color Theory main web site where you’ll find all the links and freebies you’ll ever want from a musician.

Originally posted for The Indie Show on OnAirTunes.com
Spanning nearly 40 years of music, The Indie Show brings you tracks from the early 80’s right up to new releases. Profiling bands from all around the world you’ll find something in this station that will either take you back or take your breath away.
Tags from the story
Color Theory, OnAirTunes, The Indie Show
0
Facebook Twitter Pinterest
LinkedIn Email