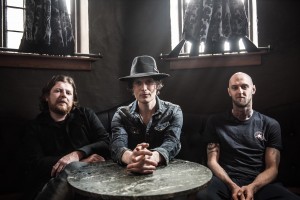 The Fratellis are back with the first single off their upcoming album, Eyes Wide, Tongue Tied (set to drop August 21st). “Baby Don’t You Lie To Me” is a frenetic, hook-filled, rocking and rollicking, good-time of a track filled with the trademark Fratellis swagger. It’s been ten years since they played their first gig together and damn, but this band is still on fire. “Baby Don’t You Lie To Me” will make you dance and sing; it will also make your mouth water — or if you’re the more demonstrative type, make grabby hands — for the entire album.

A melodic and energetic indie-rock group out of Glasgow, the Fratellis are Jon Fratelli on guitar and vocals, Mince Fratelli on drums, and Barry Fratelli on bass. They exploded onto the indie music scene in 2006 when their debut album, Costello Music, spent 83 weeks in the Top 100, and they have only gotten better in the years since. On their latest single the group oozes the kind of confidence and polish that a band can only gain from releasing three albums (two of them, Top Fives), receiving a Brit Award, playing four sold-out nights at the infamous Brixton Academy, as well as countless sold-out shows around the world.

In addition to releasing “Baby Don’t You Lie To Me,” the group has announced dates for North American and UK tours. Further, if you pre-order Eyes Wide, Tongue Tied from the band’s online store or from iTunes, you’ll get the album’s opening track, “Me And The Devil,” as well as their new single for immediate download. So give a listen to the latest from The Fratellis below, then you’re going to want to click on these links so you’re in the know about all the latest: