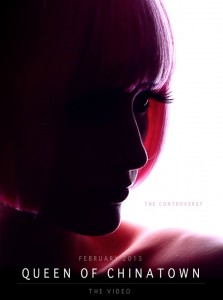 The video for the single “Queen of Chinatown” off of The Controversy’s latest album Don’t Count On Me is another artistic stunner. For those who have not seen The Controversy’s videos before, they aren’t afraid to flex their artistic muscles. This time is no different.

With the “Queen of Chinatown” we have the chance to see their leading man Thomas Hjorth taking on his feminine side for the entire world to see. This is what I like to see with bands, taking the initiative to star in their own videos without having to hire an outside person…though, I didn’t expect Thomas to be the one getting into drag. Unlike some songs where the video takes on a different concept from its song, the best thing about this video is that it’s got a great descriptive story — a boy who feels out of place in the daylight hours but at feels at home at night. It puts a face to the character that lingers inside our heads and allows us to get a deeper perspective into the “queen’s” life behind his daytime mask.

Another big noticeable thing is that Laura is not heavily focused on in order to put a spotlight onto the queen of Chinatown.  Check out the video and let the story unfold right in front of your eyes, on screen.

Written By
Serena Butler
More from Serena Butler
If you haven’t noticed over all the Christmas décor that is placed...
Read More